Searching for disappeared anti-matter: A successful start to measurements with Belle II 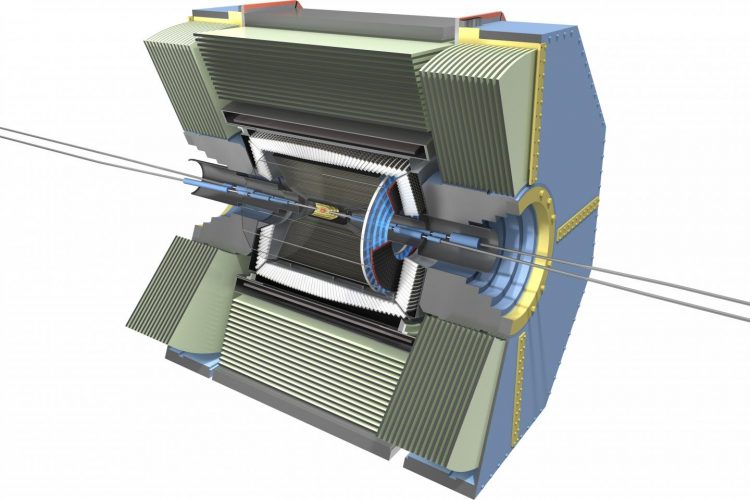 Model of the Belle II detector: Electrons and their antiparticles, the positrons, are accelerated in the SuperKEKB ring and collide in Belle II's core. Credit: KEK/Belle II

In the Belle II experiment, electrons and their anti-particles, the positrons, are brought to collision. This results in the generation of B mesons, couples consisting of a quark and an anti-quark. During earlier experiments (Belle and BaBar), scientists were able to observe that B mesons and anti-B mesons decay at different speeds (1).

This phenomenon is known as CP violation (2). It offers an orientation when it comes to the question of why the Universe contains almost no anti-matter – even though after the Big Bang, both forms of matter must have been present in equal quantities.

“However, the asymmetry observed to date is too small to explain the lack of anti-matter,” says Hans-Günther Moser from the Max Planck Institute for Physics. “That's why we're looking for a more powerful mechanism that has remained unknown to date that would burst the boundaries of the 'standard model of particle physics' that has been used to date. However, to find this new physics and to provide statistical evidence for it, physicists must collect and evaluate far more data than they have done to date.”

With this task in mind, the former KEK accelerator and Belle – which were operational from 1999 to 2010 – have been fully modernized. They are now being run under the names Belle II and SuperKEKB. The key new development is the 40-fold increase in luminosity, the number of particle collisions per area unit.

For this purpose, scientists and technicians have significantly reduced the profile of the particle beam; at the same time, it will be possible to double the number of shot particle bunches in the future. The probability that the particles might actually hit each other is thus considerably increased. In this way, scientists will have 50 times the amount of data available for evaluation in the future.

However, the additional amount of data presents major challenges when it comes to the quality of the analysis provided by the detector. After the particle collision, the B mesons decay by just 0.1 millimeters on an average flight. This means that the detectors have to work very quickly and precisely. This is ensured by a highly sensitive pixel vertex detector, a large part of which was developed and built at the Max Planck Institute for Physics and the semiconductor laboratory of the Max Planck Society. The detector has 8 million pixels overall, and delivers 50,000 images per second.

“Several special technologies are built into the pixel vertex detector,” Moser explains. “When new particle packages are fed into the SuperKEKB, which initially generates a very large background, we can blind the detector for about 1 microsecond. This means that non-relevant signals can be blocked out.” Also, the detector sensors are no thicker than a human hair, with widths of just 75 micrometers. The physicists hope that in this way, they can prevent particles from being scattered while passing through matter.

The start of the measurement operation will mark the end of a major construction project. For nine years, scientists and engineers have been working on the conversion and modernization of the detector. The run that has now begun will continue until 1st July 2019. The SuperKEKB and Belle II will restart in October 2019 after a brief pause for maintenance.

(1) In 2008, the Japanese professors Makoto Kobayashi and Toshihide Maskawa won the Nobel Prize for Physics for this discovery.