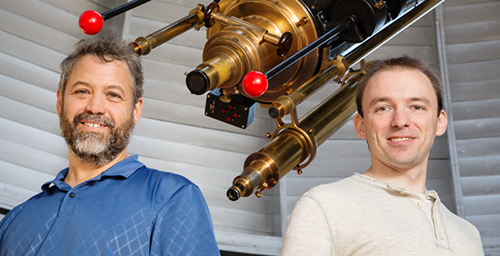 Looking at a bright, nearby baby star and the dust swirling in its cradle, astronomers from the University of Illinois and six collaborating institutions were able to make out the shape of the magnetic field surrounding the star. The findings, which present a new way of looking at star and planet formation, were published in the journal Nature.

According to University of Illinois astronomy professor Leslie Looney, who led the effort with his then-student Ian Stephens, now at Boston University, magnetic fields play important roles in astronomy.

“Magnetic fields course through these open areas of space with these big clouds of gas and dust; those are the cradles of baby stars,” Looney said. “The disk of dust and debris around the baby star is where planets are going to form, where the seeds of a solar system are sown. There are some theories about how that works, and a lot of them involve magnetic fields. But no one has ever detected a magnetic field in a disk before, so that was an essential missing piece of information.”

The astronomers focused on a very bright, newborn star named HL Tau, located a mere 450 light-years away – a short distance on astronomical scales. They used a telescope in California that the U. of I. operates in part, called the Combined Array for Research in Millimeter-wave Astronomy (CARMA). CARMA allowed the researchers to look at the dust around HL Tau at two different angles, like looking through polarized sunglasses. Dust in space is an oblong shape and aligns itself with the magnetic field, so the astronomers were able to tell the shape of the field by the tiny differences in how the dust filtered the light from the star.

They found that the magnetic field plays a role in shaping baby star systems. Furthermore, the shape they saw was somewhat surprising – a toroid, or twisted-donut shape, rather than shooting out vertically from the poles of the star as had been widely theorized.

“Now we can actually say there is a morphology, and it’s consistent with twisted toroidal fields. That means on these size scales where planet formation is happening, the field is important,” Stephens said. “It’s a different way of looking at star cradles, and a way we’ve not been able to do in the past. You’re able to get extra information you’ve never had before, reveal morphology and maybe look for differences that tell you more about the structure than you would with just looking at dust emission.”

The next step for Looney and his collaborators is to measure the magnetic field in other nearby stars, using a larger telescope with greater sensitivity. They also intend to work more closely with theorists to understand what shapes the magnetic fields and to integrate magnetic field parameters into existing star and planet formation models.

“Our models have used gas information and kinematics, but the magnetic fields were missing all that time, and that puts huge constraints on all the models,” Looney said. “We need to connect the motion of the system with how that changes the magnetic fields, and see if we can better constrain those models. Then from that, we can begin to understand the properties of the forming solar system. Magnetic fields are really an untapped way to probe a star disk.”