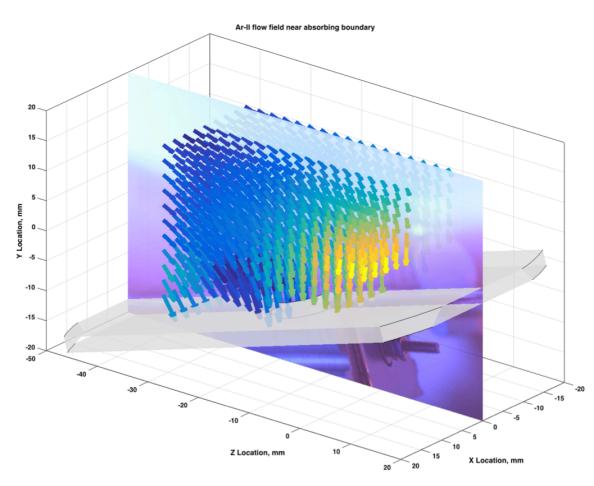 Measured flow field of ions in a plasma overlaid on visual image of the system. Credit: West Virginia University

For the first time, researchers at West Virginia University (WVU) have directly measured the complicated 3D patterns of flowing plasma as it strikes the walls of fusion and space propulsion devices.

Understanding how this process occurs, and how scientists and engineers can prevent it, is critical to the development of the next generation of energy and space exploration technologies. The measurements performed at WVU in a “helicon” plasma are the first ever 3D ion flow fields mapped in a volume.

The measurements show how plasmas in fusion tokamak devices and Hall thruster spacecraft engines accelerate parallel to the wall prior to impact. This causes the walls of these devices to erode more rapidly than previously thought, limiting their lifetimes. This flow is surprising because it is not predicted in theoretical models. The researchers are currently investigating the reasons for this behavior, looking at aspects of the plasma that were assumed to be unimportant in previous models.

These results, including the first fully 3D flow measurements (Figure 1), will be presented at the 2016 American Physical Society – Division of Plasma Physics meeting in San Jose, Oct. 31 to Nov. 4.

“These measurements have already yielded surprising insights into plasma behavior near walls,” said Derek Thompson, who took the measurements with Miguel Hernandez and Umair Siddiqui in the research laboratory of Earl Scime at West Virginia University.