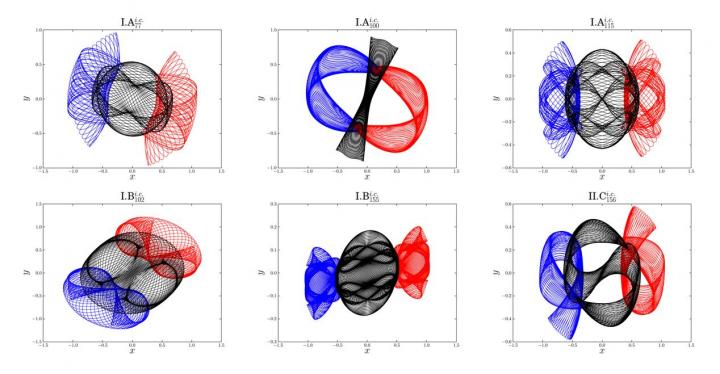 In the 300 years since three-body problem was first recognized, only three families of periodic orbits had been found, until 2013 when Suvakov and Dmitrasinovic [Phys. Rev. Lett. 110, 114301 (2013)] made a breakthrough to numerically find 13 new distinct periodic orbits, which belong to 11 new families of Newtonian planar three-body problem with equal mass and zero angular momentum (see http://www.sciencemag.org/news/2013/03/physicists-discover-whopping-13-new-solutions-three-body-problem).

Currently, two scientists, XiaoMing Li and ShiJun Liao at Shanghai Jiaotong University, China, successfully gained 695 families of periodic orbits of the above-mentioned Newtonian planar three-body system by means of national supercomputer TH-2 at Guangzhou, China, which are published online via SCIENCE CHINA-Physics Mechanics Astronomy, 2017, Vol. 60, No. 12: 129511. The movies of these orbits are given on the website http://numericaltank.sjtu.edu.cn/three-body/three-body.htm

These 695 periodic orbits include the well-known figure-eight family found by Moore in 1993, the 11 families found by Suvakov and Dmitrasinovic in 2013, and especially more than 600 new families that have never been reported.

The two scientists used the so-called “Clean Numerical Simulation (CNS)”, a new numerical strategy for reliable simulations of chaotic dynamic systems proposed by the second author in 2009, which is based on high enough order of Taylor series and multiple precision data with many enough significant digits, plus a convergence/reliability check.

The CNS can reduce truncation error and round-off error so greatly that numerical noises are negligible in a long enough interval of time, thus more periodic orbits of the three-body system can be gained.

As pointed out by Montgomery in 1998, each periodic orbit in real space of the three-body system corresponds to a closed curve on the so-called “shape sphere”, which is characterized by its topology using the so-called “free group element”.

The averaged period of an orbit is equal to the period of the orbit divided by the length of the corresponding free group element. These 695 families suggest that there should exist the quasi Kepler's third law: the square of the average period times the cube of the total kinetic and potential energy approximately equals to a constant. The generalized Kepler's third law reveals that the three-body system has something in common, which might deepen our understandings and enrich our knowledges about three-body system.

“The discovery of the more than 600 new periodic orbits is mainly due to the advance in computer science and the use of the new strategy of numerical simulation for chaotic dynamic systems, namely the CNS”, spoke the two scientists. It should be emphasized that 243 more new periodic orbits of the three-body system are found by means of the CNS. In other words, if traditional algorithms in double precision were used, about 40% new periodic orbits would be lost. This indicates the novelty and originality of the Clean Numerical Simulation (CNS), since any new methods must bring something completely new/different.

As shown in Figure 1, many pictures of these newly-found periodic orbits of the three-body system are beautiful and elegant, like modern paintings. “We are shocked and captivated by the perfect of them”, spoke the two scientists.