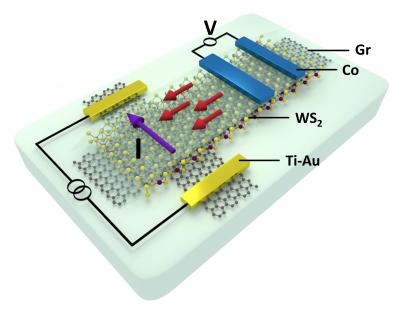 Schematics of a nanodevice, used for observation of charge-to-spin conversion in a van der Waals heterostructure of graphene and WS2. The purple and red arrows show charge current and the generated spin accumulation, respectively. Credit: Talieh Ghiasi et al.

Spintronics is an attractive alternative way of creating low-power electronic devices. It is not based on a charge current but on a current of electron spins. Spin is a quantum mechanical property of an electron, a magnetic moment that could be used to transfer or store information.

However, it has been shown that spin-orbit coupling in graphene will increase when a monolayer of a material with heavier atoms (such as a TMD) is placed on top, creating a Van der Waals heterostructure.

In the Physics of Nanodevices group, led by Professor Bart van Wees at the University of Groningen, Ph.D. student Talieh Ghiasi and postdoctoral researcher Alexey Kaverzin created such a heterostructure.

Using gold electrodes, they were able to send a pure charge current through the graphene and generate a spin current, referred to as the Rashba-Edelstein effect. This happens due to the interaction with the heavy atoms of the TMD monolayer (in this case, tungsten disulfide). This well-known effect was observed for the first time in graphene that was in proximity to other 2D materials.

'The charge current induces a spin current in the graphene, which we could measure with spin-selective ferromagnetic cobalt electrodes,' says Ghiasi. This charge-to-spin conversion makes it possible to build all-electrical spin circuits with graphene. Previously, the spins had to be injected through a ferromagnet.

'We have also shown that the efficiency of the generation of the spin accumulation can be tuned by the application of an electric field,' adds Ghiasi. This means that they have built a spin transistor in which the spin current can be switched on and off.

The Rashba-Edelstein effect is not the only effect that produces a spin current. The study shows that the Spin-Hall effect does the same, but that these spins are oriented differently. 'When we apply a magnetic field, we make the spins rotate in the field.

Different symmetries of the spin signals generated by the two effects in interaction with the magnetic field help us to disentangle the contribution of each effect in one system,' explains Ghiasi. It was also the first time that both types of charge-to-spin conversion mechanisms were observed in the same system. 'This will help us to gain more fundamental insights into the nature of spin-orbit coupling in these heterostructures.'

Apart from the fundamental insights that the study can provide, building an all-electrical 2D spin transistor (without ferromagnets) has considerable significance for spintronic applications, which is also a goal of the EU Graphene Flagship. 'This is especially true because we were able to see the effect at room temperature. The spin signal decreased with increasing temperature but was still very much present under ambient conditions.'