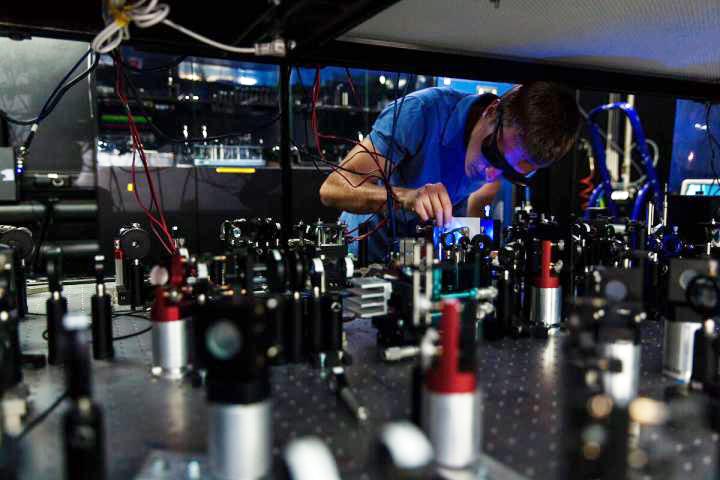 Physicists from the Russian Quantum Center (RQC), MIPT, the Lebedev Physical Institute, and L'Institut d'Optique (Palaiseau, France) have devised a method for creating a special quantum entangled state. This state enables producing a high-precision ruler capable of measuring large distances to an accuracy of billionths of a metre. The results of the study have been published in Nature Communications.

“This technique will enable us to use quantum effects to increase the accuracy of measuring the distance between observers that are separated from one another by a medium with losses. In this type of medium, quantum features of light are easily destroyed,” says Alexander Lvovsky, a co-author of the paper, the head of the RQC scientific team that conducted the research, and a professor of the University of Calgary.

The study focused on what is known as N00N states of photons in which there is a superposition of spatial positions of not one, but several photons. That is, a multiphoton laser pulse is at two points at the same time.

These states could be important for metrology, or, more precisely, they could significantly improve the capabilities of optical interferometers, such as those used to detect gravitational waves in the LIGO project.

In optical interferometers, laser beams from two mirrors “mix” with each other and interference occurs – the light waves either strengthen or cancel each other – depending on the exact position of the mirrors. This allows their microscopic displacements to be measured, because the distance between the interferometric fringes is the same as the wavelength – approximately 0.5-1 microns. However, many experiments require even greater precision. Detecting gravitational waves, for example, required measurements of displacements comparable to the diameter of a proton.

“Though such extremely high sensitivities have already be achieved, N00N states could be useful to increase the accuracy even further, because the interference fringes they create are much narrower than the wavelength.” – says Philippe Grangier, another co-author of the study, a professor of L'Institut d'Optique.

“The problem is that N00N states are extremely susceptible to losses. When travelling over long distances -in either atmospheric or fiber channels – a light beam inevitably loses intensity. For ordinary, classical light, that does not matter too much. But if an entangled state of light passes through a medium with even small losses, it “disentangles” and is no longer useful,” says Lvovsky.

He and his colleagues found a way of solving this problem.

“There is a phenomenon called entanglement swapping. Suppose that Alice and Bob have an entangled state. If I then take one part of Alice's entangled state, and another part from Bob, and I do a joint measurement on them, the remaining parts of Alice's and Bob's states will also become entangled even though they never interacted” says Lvovsky.

“In our experiment conducted at the RQC laboratory, Alice and Bob create two entangled states. The send one of the parts to a medium with losses, which in our experiment is simulated by darkened glass. A third observer, midway between Alice and Bob, conducts joint measurements on these parts. This results in entanglement swapping: the remaining parts of Alice and Bob's states are in the N00N state. And as these parts did not experience losses, they exhibit their quantum properties in full,” explains the lead author of the paper, Alexander Ulanov, a researcher at RQC and MIPT postgraduate student.

According to him, the level of losses in the glass corresponds to an atmospheric thickness of approximately 50 kilometres. The same method could also be used for light propagating in vacuum, either in the current ground-based interferometers such as LIGO, or in future space-based ones such as LISA.