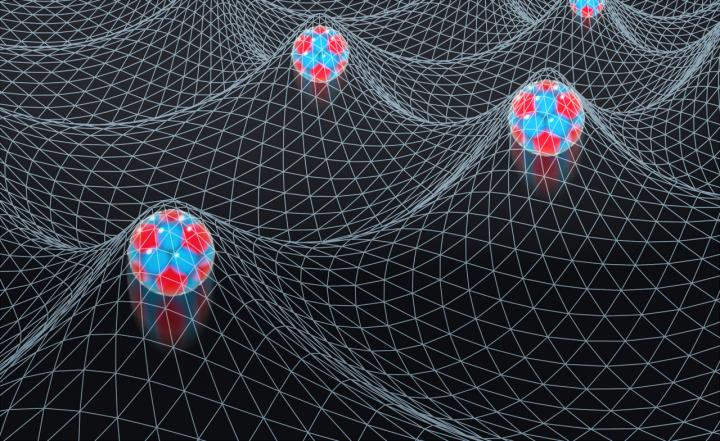 Atoms can be cooled down using a laser, but it's important to select proper frequency and direction. The same laser can create a so-called trap for cooled down atoms – a standing light wave (i.e. a wave that does not move but fluctuates in one place) keeps the atoms fixed in confined region of space.

This trap can be compared to an egg case that prevents the eggs from moving around. Such a trap can be used as a model system for studying various quantum processes – from solid state physics to high energy physics. However, it is quite difficult to give a detailed mathematical description of the systems that consist of trapped quantum particles.

“The two-body problem (e.g. a hydrogen atom or two colliding atoms) is the basis of quantum mechanics. Each body has three coordinates (X, Y, and Z, just like your Maths teacher told you). In free space this problem may be reduced to relative motion of two particles by separation of their center-of-mass.

The number of variables left in the problem is now three instead of six. The absence of a preferred direction helps reduce this problem to an even simpler one-dimensional radial equation (i.e. an equation with one variable) by separation of angular variables. But when two quantum particles are trapped, an additional condition appears, which is preferential direction.

This is the area where new methods have to be developed,” said Vladimir Melezhik, the author of the study, the doctor of science in physics and mathematics from RUDN.

Together with physicists from the University of Hamburg Vladimir Melezhik developed a mathematical method reducing multi-dimensional calculations to a system of one-dimensional equations to simplify and speed up the calculations. The authors used it to describe atomic systems with different parameters (intensity of effective interparticle interaction, initial state population, and particle energy).

The method proved to be also applicable to hybrid atom-ionic systems. If not only atoms, but also ions are trapped, new complex quantum effects can be studied. The developed algorithm provides for the calculation of collisions of atoms and ions to each other and the laser trap. In the future such hybrid structures potentially can help to model the elements of quantum computers.