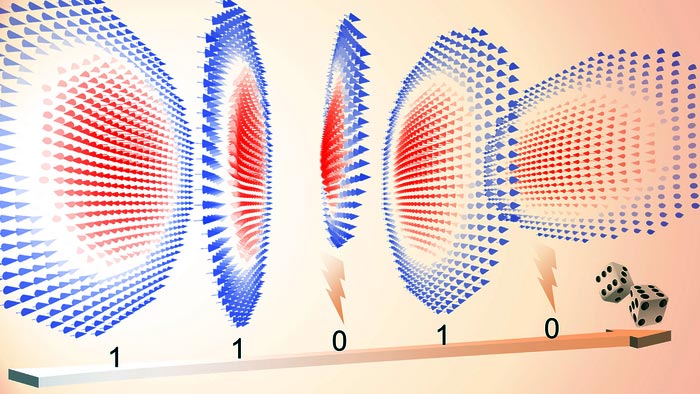 Whether for use in cybersecurity, gaming or scientific simulation, the world needs true random numbers, but generating them is harder than one might think. But a group of Brown University physicists has developed a technique that can potentially generate millions of random digits per second by harnessing the behavior of skyrmions — tiny magnetic anomalies that arise in certain two-dimensional materials.

Their research, published in Nature Communications, reveals previously unexplored dynamics of single skyrmions, the researchers say. Discovered around a half-decade ago, skyrmions have sparked interest in physics as a path toward next-generation computing devices that take advantage of the magnetic properties of particles — a field known as spintronics.

“There has been a lot of research into the global dynamics of skyrmions, using their movements as a basis for performing computations,” said Gang Xiao, chair of the Department of Physics at Brown and senior author of the research. “But in this work, we show that purely random fluctuations in the size of skyrmions can be useful as well. In this case, we show that we can use those fluctuations to generate random numbers, potentially as many as 10 million digits per second.”

Methods of producing true random numbers often draw on the natural world. Random fluctuations in electrical current flowing through a resistor, for example, can be used to generate random numbers. Other techniques harness the inherent randomness in quantum mechanics — the behavior of particles at the tiniest scale.

This new study adds skyrmions to the list of true random number generators.

Skyrmions arise from the “spin” of electrons in ultra-thin materials. Spin can be thought of as the tiny magnetic moment of each electron, which points up, down or somewhere in between. Some two-dimensional materials, in their lowest energy states, have a property called perpendicular magnetic anisotropy — meaning the spins of electrons all point in a direction perpendicular to the film. When these materials are excited with electricity or a magnetic field, some of the electron spins flip as the energy of the system rises. When that happens, the spins of surrounding electrons are perturbed to some extent, forming a magnetic whirlpool surrounding the flipped electron — a skyrmion.

Skyrmions, which are generally about 1 micrometer (a millionth of a meter) or smaller in diameter, behave a bit like a kind of particle, zipping across the material from side to side. And once they’re formed, they’re very difficult to get rid of. Because they’re so robust, researchers are interested in using their movement to perform computations and to store data.

This new study shows that in addition to the global movement of skyrmions across a material, the local behavior of individual skyrmions can also be useful. For the study, which was led by Brown postdoctoral fellow Kang Wang, the researchers fabricated magnetic thin films using a technique that produced subtle defects in the material’s atomic lattice. When skyrmions form in the material, these defects, which the researchers call pinning centers, hold the skyrmions firmly in place rather than allowing them to move as they normally would.

“Each skyrmion jumps back and forth between a large diameter and a small diameter,” Wang said. “We can measure that fluctuation, which occurs randomly, and use it to generate random numbers.”

The change in skyrmion size is measured through what’s known as the anomalous Hall effect, which is a voltage that propagates across the material. This voltage is sensitive to the perpendicular component of electron spins. When the skyrmion size changes, the voltage changes to an extent that is easily measured. Those random voltage changes can be used to produce a string of random digits.

The researchers estimate that by optimizing the defect-spacing in their device, they can produce as many as 10 million random digits per second, providing a new and highly efficient method of producing true random numbers.

The research was supported by the National Science Foundation (OMA-1936221).