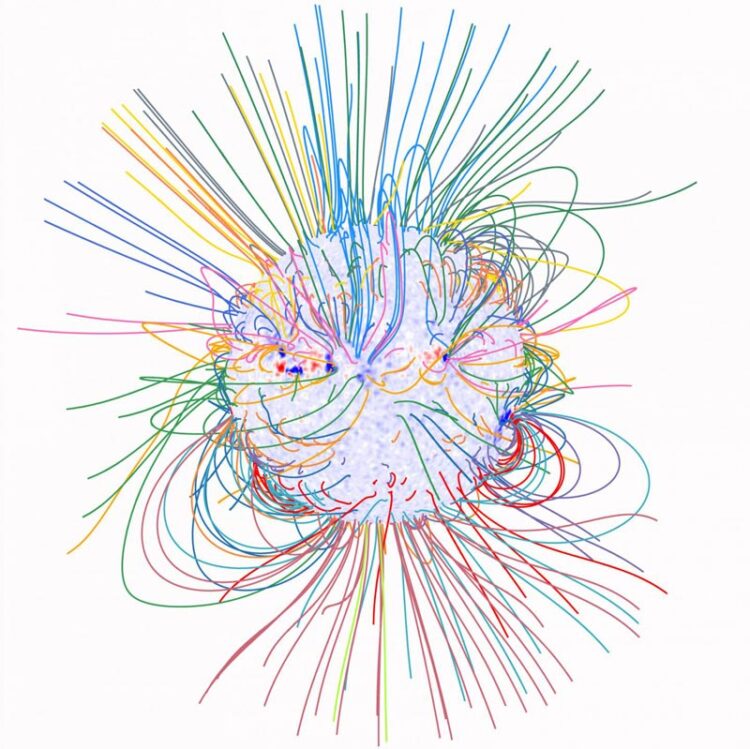 Magnetic field of the Sun calculated from a theoretical model
Credit: YANG Zihao and TIAN Hui

An international team led by TIAN Hui, a professor from both Peking University and National Astronomical Observatories of Chinese Academy of Sciences (NAOC), has measured the global magnetic field of the solar corona for the first time. The study was published in Science on August 7.

More than 20 years ago, a technique called coronal seismology or magneto-seismology has been introduced for coronal magnetic field measurements. This method makes use of some types of oscillations or waves that are observed in coronal structures.

However, these oscillations/waves are just occasionally observed in small regions of the corona, and thus their potential for magnetic field measurements is limited.

CoMP is a coronagraph with a 20-cm aperture. It can observe the solar corona using the Fe XIII 1074.7 nm and 1079.8 nm infrared spectral lines. The Doppler image sequence obtained from CoMP observations often reveal the prevalence of propagating periodic disturbances, indicating the ubiquitous presence of transverse plasma waves in the corona.

The team applied the magneto-seismology method to these pervasive waves. They extended the previously developed wave-tracking technique to the whole field of view, and obtained the distribution of the wave propagation speed in the global corona.

They also obtained a global map of the coronal density from observations of the two Fe XIII lines. Combing the maps of wave propagation speed and density, they mapped the magnetic field in the global corona.

“By applying this technique to CoMP-like instruments in the future, global coronal magnetic field maps could be routinely obtained, filling in the missing part of the measurements of the Sun’s global magnetism,” said Prof. TIAN.

Such measurements could provide critical information to advance our understanding of the physical mechanisms responsible for solar eruptions and the 11-year sunspot cycle.