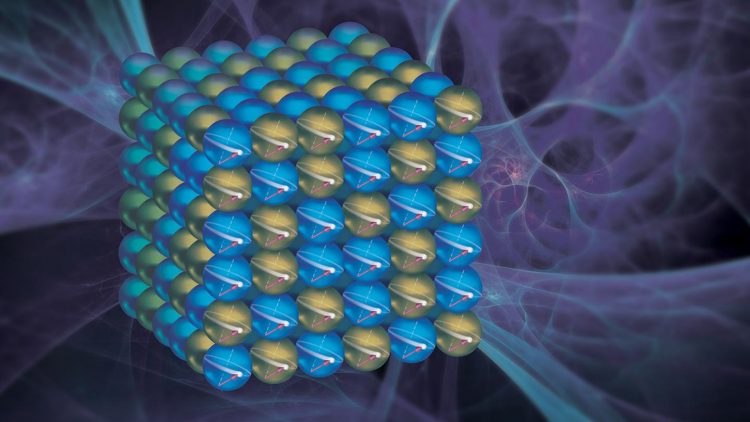 Researchers at Argonne have discovered a way to control the direction of electron spin in a cobalt-iron alloy, influencing its magnetic properties. The result could have implications for more powerful and energy-efficient materials for information storage. Credit: Argonne National Laboratory

Sometimes scientific discoveries can be found along well-trodden paths. That proved the case for a cobalt-iron alloy material commonly found in hard disk drives.

As reported in a recent issue of Physical Review Letters, researchers from the U.S. Department of Energy's (DOE) Argonne National Laboratory, along with Oakland University in Michigan and Fudan University in China, have found a surprising quantum effect in this alloy.

“When you drive your car down a flat highway with no wind, the dissipating energy from drag is the same regardless of the direction you travel. With the effect we discovered, it's like your car experiences more drag if you're traveling north-south than if you're traveling east-west.” — Argonne materials scientist Olle Heinonen

The effect involves the ability to control the direction of electron spin, and it could allow scientists to develop more powerful and energy-efficient materials for information storage. By changing the electron spin direction in a material, the researchers were able to alter its magnetic state.

This greater control of magnetization allows more information to be stored and retrieved in a smaller space. Greater control could also yield additional applications, such as more energy-efficient electric motors, generators and magnetic bearings.

The effect the researchers discovered has to do with “damping,” in which the direction of electron spin controls how the material dissipates energy. “When you drive your car down a flat highway with no wind, the dissipating energy from drag is the same regardless of the direction you travel,” said Argonne materials scientist Olle Heinonen, an author of the study.

“In technical terms, we discovered a sizable effect from magnetic damping in nanoscale layers of cobalt-iron alloy coated on one side of a magnesium oxide substrate,” added Argonne materials scientist Axel Hoffmann, another author of the study. “By controlling the electron spin, magnetic damping dictates the rate of energy dissipation, controlling aspects of the magnetization.”

The team's discovery proved especially surprising because the cobalt-iron alloy had been widely used in applications such as magnetic hard drives for many decades, and its properties have been thoroughly investigated. It was conventional wisdom that this material did not have a preferred direction for electron spin and thus magnetization.

In the past, however, scientists prepared the alloy for use by “baking” it at high temperature, which orders the arrangement of the cobalt and iron atoms in a regular lattice, eliminating the directional effect. The team observed the effect by examining unbaked cobalt-iron alloys, in which cobalt and iron atoms can randomly occupy each other's sites.

The team was also able to explain the underlying physics. In a crystal structure, atoms normally sit at perfectly regular intervals in a symmetric arrangement. In the crystal structure of certain alloys, there are slight differences in the separation between atoms that can be removed through the baking process; these differences remain in an “unbaked” material.

Squeezing such a material at the atomic level further changes the separation of the atoms, resulting in different interactions between atomic spins in the crystalline environment. This difference explains how the damping effect on magnetization is large in some directions, and small in others.

The result is that very small distortions in the atomic arrangement within the crystalline structure of cobalt-iron alloy have giant implications for the damping effect. The team ran calculations at the Argonne Leadership Computing Facility, a DOE Office of Science User Facility, that confirmed their experimental observations.

The work at Argonne was supported by DOE's Office of Science, as well as the DOE Visiting Faculty Program.