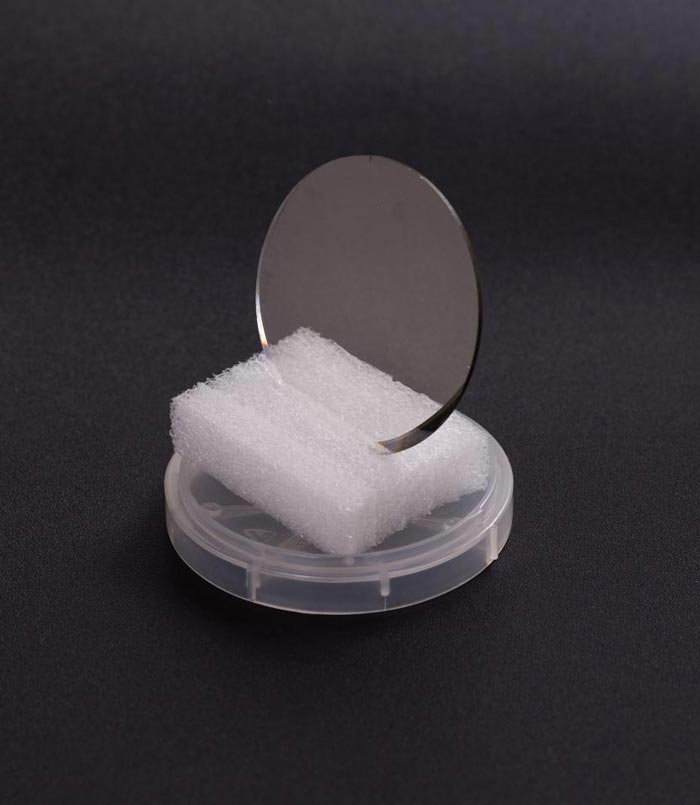 The team created their sensor from a silicon carbide chip synthesized at the Ioffe Physical-Technical Institute. Credit: Andrey Anisimov

Researchers recently discovered that the strength of the magnetic field required to elicit a particular quantum mechanical process, such as photoluminescence and the ability to control spin states with electromagnetic (EM) fields, corresponds to the temperature of the material. Based on this finding, scientists can determine a sample's temperature to a resolution of one cubic micron by measuring the field strength at which this effect occurs. Temperature sensing is integral in most industrial, electronic and chemical processes, so greater spatial resolution could benefit commercial and scientific pursuits. The team reports their findings in AIP Advances, from AIP Publishing.

In diamonds, nitrogen atoms can replace carbon atoms; when this occurs next to vacancies in the crystal lattice, it produces useful quantum properties. These vacancies can have a negative or neutral charge. Negatively charged vacancy centers are also photoluminescent and produce a detectable glow when exposed to certain wavelengths of light. Researchers can use a magnetic field to manipulate the spins of the electrons in the vacancies, which alters the intensity of the photoluminescence.

A team of Russian and German researchers created a system that can measure temperatures and magnetic fields at very small resolutions. The scientists produced crystals of silicon carbide with vacancies similar to the nitrogen-vacancy centers in diamonds. Then, they exposed the silicon carbide to infrared laser light in the presence of a constant magnetic field and recorded the resulting photoluminescence.

Stronger magnetic fields make it easier for electrons in these vacancies to transfer between energy spin states. At a specific field strength, the proportion of electrons with spin 3/2 quickly changes, in a process called anticrossing. The brightness of the photoluminescence depends on the proportion of electrons in various spin states, so the researchers could gauge the strength of the magnetic field by monitoring the change in brightness.

Additionally, the luminescence abruptly changes when electrons in these vacancies undergo cross-relaxation, a process where one excited quantum system shares energy with another system in its ground state, bringing both to an intermediate state. The strength of the field needed to induce cross-relaxation is directly tied to the temperature of the material. By varying the strength of the field, and recording when photoluminescence suddenly changed, the scientists could calculate the temperature of the region of the crystal under investigation. The team was surprised to discover that the quantum effects remained even at room temperature.

“This study allows us to create temperature and magnetic field sensors in one device,” said Andrey Anisimov, of the Ioffe Physical-Technical Institute of the Russian Academy of Sciences and one of the authors of the paper. Moreover, sensors can be miniaturized to 100 nanometers, which would enable their use in the space industry, geophysical observations and even biological systems. “In contrast to diamond, silicon carbide is already an available semiconductor material, and diodes and transistors are already made from it,” Anisimov said.

AIP Advances is an open access journal publishing in all areas of physical sciences–applied, theoretical, and experimental. All published articles are freely available to read, download, and share. The journal prides itself on the belief that all good science is important and relevant. Our inclusive scope and publication standards make it an essential outlet for scientists in the physical sciences. See https://aip.scitation.org/adv/info/focus.