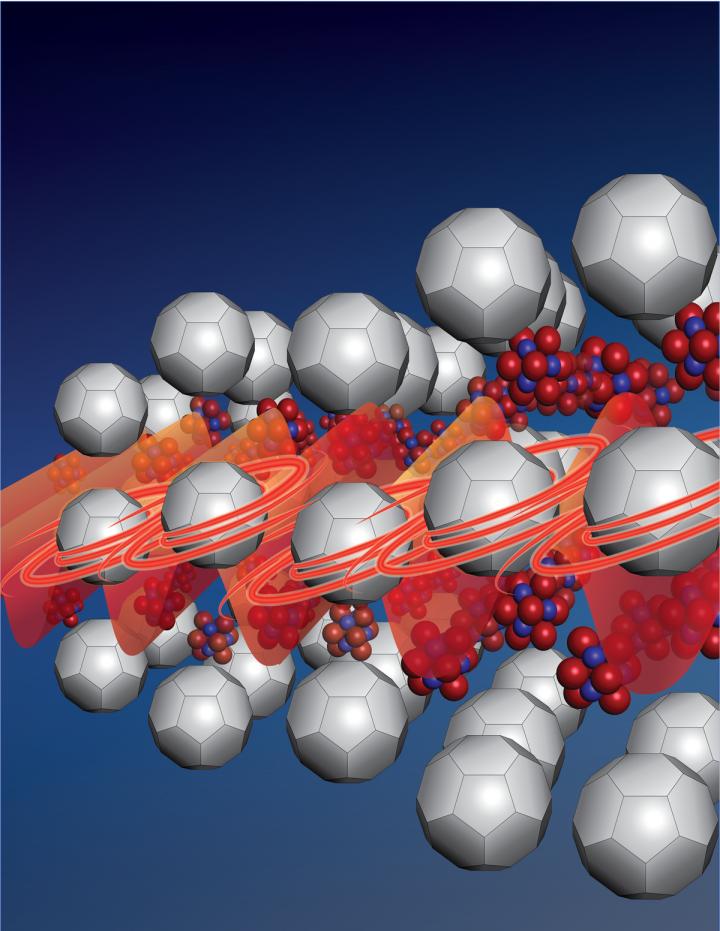 Researchers found that the thermal conductivity of superatom crystals is directly related to the rotational disorder within those structures. The findings were published in an article in Nature Materials this week.

Superatom crystals are periodic–or regular–arrangements of C60 fullerenes and similarly sized inorganic molecular clusters. The nanometer sized C60s look like soccer balls with C atoms at the vertices of each hexagon and pentagon.

Although rotational disorder is known in bulk C60, this is the first time that the process has been leveraged to create very different thermal conductivities in structurally identical materials.

Imagine a line of people passing sandbags from one end to the other. Now imagine a second line where each person is spinning around–some clockwise, some counter clockwise, some fast, and some slow. It would be very difficult to move a sandbag down that line.

“This is similar to what is happening with thermal conductivity in the superatoms,” explained Malen. “It is easier to transfer heat energy along a fixed pattern than a disordered one.”

Columbia University's Assistant Professor of Chemistry Xavier Roy, the other corresponding author of the study, created the superatom crystals in his laboratory by synthesizing and assembling the building blocks into the hierarchical superstructures.

“Superatom crystals represent a new class of materials with potential for applications in sustainable energy generation, energy storage, and nanoelectronics,” said Roy. “Because we have a vast library of superatoms that can self-assemble, these materials offer a modular approach to create complex yet tunable atomically precise structures.”

The researchers believe that these findings will lead to further investigation into the unique electronic and magnetic properties of superstructured materials. One future application might include a new material that could change from being a thermal conductor to a thermal insulator, opening up the potential for new kinds of thermal switches and transistors.

“If we could actively control rotational disorder, we would create a new paradigm for thermal transport,” said Malen.

Malen, director of the Malen Laboratory at Carnegie Mellon, received the College of Engineering's Outstanding Research Award in 2016.

About the College of Engineering: The College of Engineering at Carnegie Mellon University is a top-ranked engineering college that is known for our intentional focus on cross-disciplinary collaboration in research. The College is well-known for working on problems of both scientific and practical importance. Our acclaimed faculty have a focus on innovation management and engineering to yield transformative results that will drive the intellectual and economic vitality of our community, nation and world.