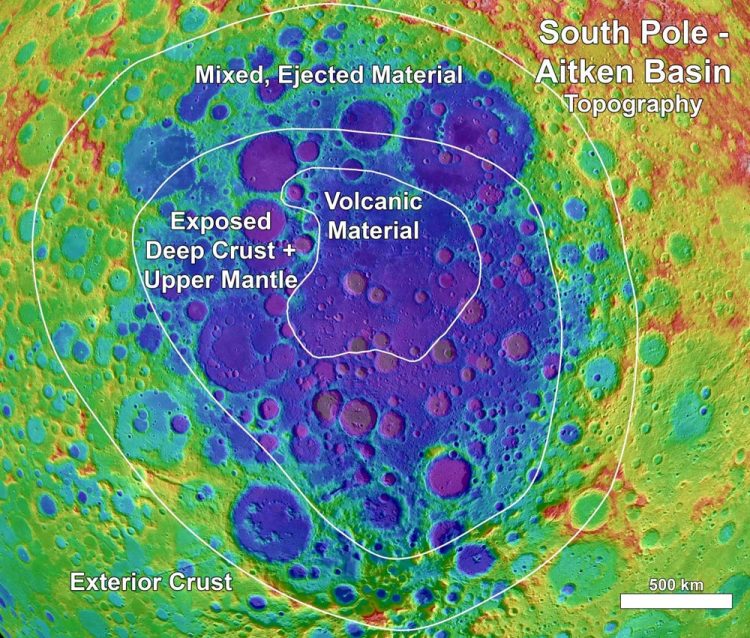 The study, by planetary scientists from Brown University, maps the mineralogy of the South Pole-Aitken (SPA) basin, a gash in the lunar surface with a diameter of approximately 2,500 kilometers (1,550 miles). SPA is thought to be the oldest and largest impact basin on the Moon, and scientists have long had their eyes on it as a target for future lunar landers.

“This is a highly detailed look at the compositional structure of this huge impact basin using modern, cutting-edge data,” said Dan Moriarty, a postdoctoral researcher at NASA's Goddard Space Flight Center who led the research while a doctoral student at Brown. “Given that it's such an important target for future exploration and perhaps returning a sample to Earth, we hope this will serve as a framework for more detailed study and landing site selection.”

The study will be published in the Journal of Geophysical Research: Planets. A preprint version is available online.

The impact that created SPA is thought to have blasted all the way through the Moon's crust and into the mantle, which is part of the reason that scientists are so interested in it. Visiting SPA and grabbing a sample of that exposed mantle material could provide critical clues about the Moon's origin and evolution.

A sample could also help scientists put a firm date on the impact. SPA is thought to be the Moon's oldest basin, so a firm date would be a key milestone in the timeline of lunar history as well as events affecting early Earth.

But in order to get the right samples, it's important to know the best spots to find them. That's what Moriarty and co-author Carlé Pieters, a professor in Brown's Department of Earth, Environmental and Planetary Sciences, had in mind for this study. They used detailed data from Moon Mineralogy Mapper, a spectrometer that flew aboard India's Chandrayaan-1 spacecraft for which Pieters is principal investigator.

“Having global access with modern imaging spectrometers from lunar orbit is the next best thing to having a geologist with a rock hammer doing the field work across the surface.” Pieters said. “Ideally, in the future we'll have both working together.”

The research identified four distinct mineralogical regions that form a bullseye pattern within and around the basin. At the bulleye's center is a region of what appears to be deposits of volcanic material, a sign that the center of the basin may have been covered by a volcanic flow sometime soon after the SPA impact. That central region is surrounded by a ring of material dominated by magnesium-rich pyroxene, a mineral thought to be plentiful in the lunar mantle. Outside of that is a ring in which pyroxene mixes with the standard crustal rocks of the lunar highlands. Outside of that ring is the basin exterior, where the signatures of impact-related material disappear.

The findings have some interesting implications for SPA exploration, the researchers say. The research suggests, for example, that finding pristine mantle material in the middle of the basin might be a bit tricky because of the large volcanic deposit.

“That's a little bit counterintuitive,” Moriarty said. “Typically the deepest excavation would be in the middle of the crater. But we show that the middle of SPA has been covered over by what looks like a volcanic flow.”

So if you're looking for mantle, it might be wise to land in the ring surrounding the center, where what appears to be mantle material is highly concentrated.

But an ideal landing site, Moriarty says, might be a spot that has both mantle and volcanic material, because those volcanics are interesting in their own right. Their composition is a little different than that of other volcanic rocks found on the Moon, which suggests they have a unique origin.

“If these rocks are indeed volcanic, it means that there was a really interesting kind of volcanism happening at SPA,” Moriarty said. “It could be related to the extreme geophysical environment that would have been in place during the formation of the basin. That would be really interesting to look at in more depth.”

“We think going after both mantle and volcanics would make for a richer science return,” Moriarty said.

Moriarty is hopeful that these findings will give mission planners something to think about. China is currently in the process of planning for a mission to SPA. The region has appeared repeatedly on NASA's “decadal survey” of planetary scientists, which is used to inform the agency's mission priorities.

“Impacts are the dominant process that drove solar system creation and evolution, and SPA is the largest confirmed impact structure on the Moon, if not the entire solar system,” Moriarty said. “That makes it an important end member in understanding impact processes. We think this work could provide a roadmap for exploring SPA in more detail.”

The research was supported by NASA's LASER (NNX12AI96G) and SSERVI (NNA14AB01A) programs.