Rerun of supernova blast expected to appear in 2037 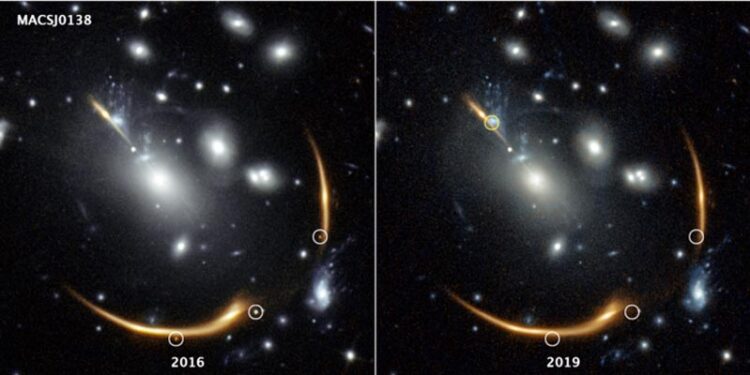 It’s challenging to make predictions, especially in astronomy. There are however, a few forecasts astronomers can depend on, such as the timing of upcoming lunar and solar eclipses and the clockwork return of some comets.

Now, looking far beyond the solar system, astronomers have added a solid prediction of an event happening deep in intergalactic space: an image of an exploding star, dubbed Supernova Requiem, which will appear around the year 2037. Although this rebroadcast will not be visible to the naked eye, some future telescopes should be able to spot it.

It turns out that this future appearance will be the fourth-known view of the same supernova, magnified, brightened, and split into separate images by a massive foreground cluster of galaxies acting like a cosmic zoom lens. Three images of the supernova were first found from archival data taken in 2016 by NASA’s Hubble Space Telescope.

The multiple images are produced by the monster galaxy cluster’s powerful gravity, which distorts and magnifies the light from the supernova far behind it, an effect called gravitational lensing. First predicted by Albert Einstein, this effect is similar to a glass lens bending light to magnify the image of a distant object.

The three lensed supernova images, seen as tiny dots captured in a single Hubble snapshot, represent light from the explosive aftermath. The dots vary in brightness and color, which signify three different phases of the fading blast as it cooled over time.

“This new discovery is the third example of a multiply imaged supernova for which we can actually measure the delay in arrival times,” explained lead researcher Steve Rodney of the University of South Carolina in Columbia. “It is the most distant of the three, and the predicted delay is extraordinarily long. We will be able to come back and see the final arrival, which we predict will be in 2037, plus or minus a couple of years.”

The light that Hubble captured from the cluster, MACS J0138.0-2155, took about four billion years to reach Earth. The light from Supernova Requiem needed an estimated 10 billion years for its journey, based on the distance of its host galaxy.

The team’s prediction of the supernova’s return appearance is based on computer models of the cluster, which describe the various paths the supernova light is taking through the maze of clumpy dark matter in the galactic grouping. Dark matter is an invisible material that comprises the bulk of the universe’s matter and is the scaffolding upon which galaxies and galaxy clusters are built.

Each magnified image takes a different route through the cluster and arrives at Earth at a different time, due, in part, to differences in the length of the pathways the supernova light followed.

“Whenever some light passes near a very massive object, like a galaxy or galaxy cluster, the warping of space-time that Einstein’s theory of general relativity tells us is present for any mass, delays the travel of light around that mass,” Rodney said.

In addition, the lensed supernova image predicted to appear in 2037 lags behind the other images of the same supernova because its light travels directly through the middle of the cluster, where the densest amount of dark matter resides. The immense mass of the cluster bends the light, producing the longer time delay. “This is the last one to arrive because it’s like the train that has to go deep down into a valley and climb back out again. That’s the slowest kind of trip for light,” Rodney explained.

He was comparing new REQUIEM data from 2019 with archival images taken in 2016 from a different Hubble science program. A tiny red object in the 2016 data caught his eye, which he initially thought was a far-flung galaxy. But it had disappeared in the 2019 images.

“But then, on further inspection of the 2016 data, I noticed there were actually three magnified objects, two red and a purple,” he explained. “Each of the three objects was paired with a lensed image of a distant massive galaxy. Immediately it suggested to me that it was not a distant galaxy but actually a transient source in this system that had faded from view in the 2019 images like a light bulb that had been flicked off.”

Brammer teamed up with Rodney to conduct a further analysis of the system. The lensed supernova images are arranged in an arc around the cluster’s core. They appear as small dots near the smeared orange features that are thought to be the magnified snapshots of the supernova’s host galaxy.

Study co-author Johan Richard of the University of Lyon in France produced a map of the amount of dark matter in the cluster, inferred from the lensing it produces. The map shows the predicted locations of lensed objects. This supernova is predicted to appear again in 2042, but it will be so faint that the research team thinks it will not be visible.

Catching the rerun of the explosive event will help astronomers measure the time delays between all four supernova images, which will offer clues to the type of warped-space terrain the exploded star’s light had to cover. Armed with those measurements, researchers can fine-tune the models that map out the cluster’s mass. Developing precise dark-matter maps of massive galaxy clusters is another way for astronomers to measure the universe’s expansion rate and investigate the nature of dark energy, a mysterious form of energy that works against gravity and causes the cosmos to expand at a faster rate.

This time-delay method is valuable because it’s a more direct way of measuring the universe’s expansion rate, Rodney explained. “These long time delays are particularly valuable because you can get a good, precise measurement of that time delay if you are just patient and wait years, in this case more than a decade, for the final image to return,” he said. “It is a completely independent path to calculate the universe’s expansion rate. The real value in the future will be using a larger sample of these to improve the precision.”

Spotting lensed images of supernovae will become increasingly common in the next 20 years with the launch of NASA’s Nancy Grace Roman Space Telescope and the start of operations at the Vera C. Rubin Observatory. Both telescopes will observe large swaths of the sky, which will allow them to spot dozens more multiply imaged supernovae.

Future telescopes such as NASA’s James Webb Space Telescope also could detect light from supernova Requiem at other epochs of the blast. The team’s results will appear on September 13 in the journal Nature Astronomy.

Now you see them, now you don’t. Three views of the same supernova appear in the 2016 image on the left, taken by the Hubble Space Telescope. But they’re gone in the 2019 image. The distant supernova, named Requiem, is embedded in the giant galaxy cluster MACS J0138. The cluster is so massive that its powerful gravity bends and magnifies the light from the supernova, located in a galaxy far behind it. Called gravitational lensing, this phenomenon also splits the supernova’s light into multiple mirror images, highlighted by the white circles in the 2016 image. The multiply imaged supernova disappears in the 2019 image of the same cluster, at right. The snapshot, taken in 2019, helped astronomers confirm the object’s pedigree. Supernovae explode and fade away over time. Researchers predict that a rerun of the same supernova will make an appearance in 2037. The predicted location of that fourth image is highlighted by the yellow circle at top left. The light from Supernova Requiem needed an estimated 10 billion years for its journey, based on the distance of its host galaxy. The light that Hubble captured from the cluster, MACS J0138.0-2155, took about four billion years to reach Earth. The images were taken in near-infrared light by Hubble’s Wide Field Camera 3.

The Hubble Space Telescope is a project of international cooperation between NASA and ESA (European Space Agency). NASA’s Goddard Space Flight Center in Greenbelt, Maryland, manages the telescope. The Space Telescope Science Institute (STScI) in Baltimore, Maryland, conducts Hubble science operations. STScI is operated for NASA by the Association of Universities for Research in Astronomy in Washington, D.C.