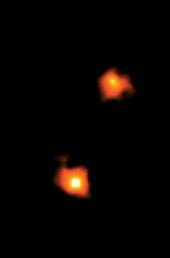 This pair of asteroids is locked in a mutual orbit. <br>© Nature <br>

One lump of rock is revealed as two in the distant Kuiper belt.

The stand-offish dance of two asteroids at the outer reaches of the Solar System is captivating astronomers. The two rocky objects, discovered locked in mutual orbit, could tell us about the properties of the far-flung Kuiper belt.

Christian Veillet and his team1 studied an object called 1998 WW31 in the Kuiper belt, a sparsely populated region of space beyond the orbit of Neptune. The object was previously thought to be a single rock.

One is in fact two, the team found, using images obtained by the Canada-France-Hawaii Telescope in Hawaii. And the pair follow an unusual elongated, ellipse-shaped orbit which keeps them 20-40,000 km apart. This is considered a very distant partnership for a ’binary object’.

The circling pair, which complete a rotation every 570 days, might offer some vital clues to the composition of rocks in the Kuiper belt. Its extreme distance makes resident objects difficult to study.

If one of the circling bodies eclipses the other, the pair’s size could be estimated and hence their density. Understanding the composition of material in the Kuiper belt – which is thought to contain rubble left over from planet formation – might help to discriminate between different explanations for the formation of the Solar System.

Kuiper-belt binaries are hard to spot, because two small bodies can appear as a single fuzzy blob of reflected sunlight at such long distances. Even if two spots are seen, several images are needed to rule out the possibility that they are two adjacent stars along our line of sight. Veillet and his team carried out such careful analyses before they could confidently claim that 1998 WW31 is indeed a binary.

The elliptical orbit is very different from that of the best known partnership in the Kuiper belt: the outermost planet Pluto and its moon Charon. The binary systems known in the asteroid belt between Mars and Jupiter also stick closer together than 1998 WW31.

The new discovery challenges existing theories of how two asteroid-like bodies can become bound together by their gravitational pull. Researchers are not yet clear why the two rocks have not been ripped apart by interactions with other bodies in the Kuiper belt.