Was adolescent galaxy a gang member? 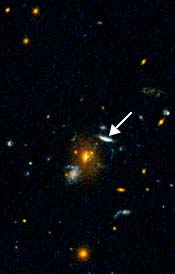 European astronomers have got their first glimpse of the soup of matter that surrounded a galaxy in the early Universe, just 3 billion years after the Big Bang. Their results provide clues as to how this matter got together, which is crucial to understanding why the Universe looks the way it does today1.

The 12-billion-year-old galaxy is called MS 1512-cB58. It is not the earliest galaxy known, but because of a cosmic coincidence it is by far the brightest of its vintage.

MS 1512-cB58’s light would be too weak to be seen but for a light-bending cluster of more recent galaxies lying between it and the Earth. This cluster magnifies MS 1512-cB58 – a phenomenon called gravitational lensing. “Without it we’d just see a normal galaxy very faintly,” says Sandra Savaglio of the Rome Astronomical Observatory in Monteporzio, Italy.

Working with the European Southern Observatory’s Very Large Telescope in Chile’s Atacama Desert, Savaglio’s team found that intervening clouds of dust and gas had scattered ultraviolet light from MS 1512-cB58, as it does all light from distant objects.

But their results suggest that there is a lot of material in the immediate environment of MS 1512-cB58 – possibly a gang of other galaxies. It could be more clouds of gas, but it may be a vast cluster of galaxies called a supercluster. “Where there is gas, there are probably stars and forming galaxies,” says Savaglio.

This is crucial information to astronomers. They know that matter cooled and slowly clumped together after the Big Bang, forming stars and galaxies. But how much of this stuff there was, and how quickly it came together, is a mystery.

Savaglio’s results suggest that it happened relatively quickly. “If 12 billion years ago there were already clusters of clouds, it means that the Universe was in a very evolved state,” she says.

Chuck Steidel, who studies galaxy formation at the California Institute of Technology in Pasadena, is cautious about drawing conclusions from measurements of a single galaxy. He views Savaglio’s findings rather as proof that galaxies can be used to do background surveys of matter in the Universe.

Unfortunately MS 1512-cB58 is the only galaxy that can be used to study the distribution of matter using today’s technology. Future telescopes – like the proposed Next Generation Space Telescope – may be able to probe the matter surrounding galaxies just as old without the help of a gravitational lens. This should make thousands of galaxies available for study.

Savaglio’s team bent over backwards to see the magnified galaxy. MS 1512-cB58 lies in the Earth’s northern skies, yet the VLT is in the south. There are northern telescopes more powerful than the VLT, but none is sensitive enough to the ultraviolet light that Savaglio’s team were looking for. So they pointed the telescope just above the horizon in the Chile’s northern sky to see MS 1512-cB58. “It was practically lying down,” recalls Savaglio.