Swimming &#039;to the left&#039; gets bacteria upstream, and may promote infection

“Escherichia coli (E. coli) and some other pathogenic bacteria with flagella interact with the flow of liquid when they are near a surface,” said Hür Köser, assistant professor of electrical engineering at Yale and the study's senior author, who has collaborated with a diverse team of scientists for this study.

“Each cell normally has two to six flagella that can rotate together as a bundle and act as a propeller to drive the cell forward. Away from any boundaries, the cells swim in a straight line, but near a surface, opposing forces of flow and bacterial forward motion cause the bacteria to continuously swim to one side — to the left.” The study determined that swimming “to the left” is a hydrodynamic process that is fundamentally related to the way the cells propel themselves in this manner.

Köser and his colleagues show that this phenomenon allows flagellated bacteria, such as E. coli, to find crevices or imperfections on the surface, get trapped, and swim upstream. This allows the bacteria to eventually locate large reservoirs with richer sources of food and better conditions for multiplying.

“We think that upstream swimming of bacteria may be relevant to the transport of E. coli in the urinary tract,” said Köser. “It might also explain the high rates of infection in catheterized patients and the incidence of microbial contamination at protected wellheads. To our knowledge, this is the first time that a natural propensity to swim upstream has been discovered and described in bacteria.”

To study the hydrodynamics of these bacteria in a flow environment, Köser's team constructed microfluidic devices using soft lithography. Inside the devices they set up various flow patterns to observe the bacteria in channels that were only 150 or 300 microns wide and between 50 and 450 microns deep. They were able to observe how the bacteria moved at a wide range of flow rates — between 0.05 and 20 microliters per minute. 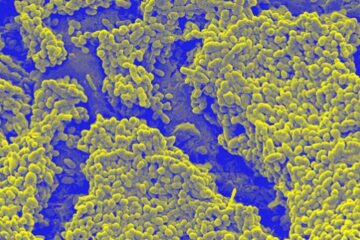