A new theory of climate change 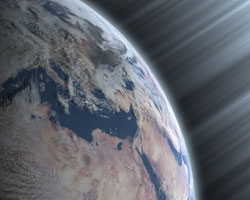 The review paper entitled ‘Cosmoclimatology: a new theory emerges’ appears in the February issue of Astronomy & Geophysics. Here are some of its salient points.

For more than 20 years, satellite records of low-altitude clouds have closely followed variations in cosmic rays. Just how cosmic rays take part in cloud-making appeared in the SKY experiment, conducted in the basement of the Danish National Space Center. Electrons set free in the air by passing cosmic rays help to assemble the building blocks for cloud condensation nuclei on which water vapour condenses to make clouds.

Cosmic ray intensities – and therefore cloudiness – keep changing because the Sun’s magnetic field varies in its ability to repel cosmic rays coming from the Galaxy, before they can reach the Earth. Radioactive carbon-14 and other unusual atoms made in the atmosphere by cosmic rays provide a record of how cosmic-ray intensities have varied in the past. They explain repeated alternations between cold and warm periods during the past 12,000 years. Whenever the Sun was feeble and cosmic-ray intensities were high, cold conditions ensued, most recently in the Little Ace Age that climaxed 300 years ago.

On long timescales the intensity of cosmic rays varies more emphatically because the influx from the Galaxy changes. During the past 500 million years the Earth has passed through four ‘hothouse’ episodes, free of ice and with high sea levels, and four ‘icehouse’ episodes like the one we live in now, with ice-sheets, glaciers and relatively low sea levels.

Nir Shaviv of the Hebrew University in Jerusalem, together with Ján Veizer of the Ruhr University and the University of Ottawa, links these changes to the journey of the Sun and the Earth through the Milky Way Galaxy. They blame the icehouse episodes on encounters with bright spiral arms, where cosmic rays are most intense. More frequent chilling events, every 34 million years or so, occur whenever the solar system passes through with the mid-plane of the Galaxy.

In Snowball Earth episodes around 700 and 2300 million years ago, even the Equator was icy. At those times the birth-rate of stars in the Galaxy was unusually high, which would have also meant a large number of exploding stars and intense cosmic rays. Earlier still, the theory of cosmic rays and clouds helps to explain why the Earth did not freeze solid when it was very young. The Sun was much fainter than it is now, but also more vigorous in repelling cosmic rays, so the Earth would not have had much cloud cover.

While calculating the changing influx since life began about 3.8 billion years ago, Dr Svensmark discovered a surprising connection between cosmic-ray intensities and a variability of the productivity of life. The biggest fluctuations in productivity coincided with high star formation rates and cool periods in the Earth’s climate. Conversely, during a billion years when star formation was slow, cosmic rays were less intense and the Earth’s climate was warmer, the biosphere was almost unchanging in its productivity.

Near the end of his review Dr Svensmark writes: ‘The past 10 years have seen the reconnaissance of a new area of research by a small number of investigators. The multidisciplinary nature of cosmoclimatology is both a challenge and an opportunity for many lines of inquiry.’ Even the search for alien life is affected, because it should now take into account of the need for the right magnetic environment, if life is to originate and survive on the planets of other stars.