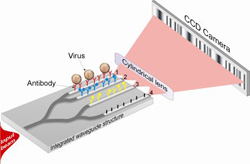 Monochromatic light from a laser source is coupled to a channel waveguide and is guided into four parallel channels. These four channels include one reference channel (4) and three measuring channels (1-3) that are used to monitor different viruses by coating the channels with appropriate antibodies. Upon exiting from these four waveguide channels, the light interferes on a screen generating an interference pattern. Specific virus binding to the antibody coated waveguide surface causes a corresponding phase change that is measured as a change in the interference pattern. Analysis of the interference pattern thus yields information on the amount of bound virus particles on different channels.

Scientists of the Biophysical Engineering Group of the University of Twente in The Netherlands have developed an ultrasensitive sensor that can be used in a handheld device to, within minutes, detect various viruses and measure their concentration. The sensor could be used to quickly screen people at hospitals, airports and emergency clinics to control outbreaks of diseases such as SARS and the bird flu. All it would take is a tiny sample of saliva, blood, or other body fluid. Dr. Aurel Ymeti and others present their results in February’s issue of Nano Letters. They already caught the attention of MIT’s Technology Review and the Materials Science and Nanotechnology section of Nature.com.

The essential innovation in the technique reported in this paper is the combining of an integrated optics interferometric sensor with antibody-antigen recognition approaches to yield a very sensitive, very rapid test for virus detection. The technology is amenable to miniaturization and mass-production, and thus has significant potential to be developed into a handheld, point-of-care device.

The attention this sensor is currently achieving in the international scientific and nanotechnology community can be understood in the light of recent serious virus outbreaks such as SARS and H5N1 bird flu virus. Future viral outbreaks are a major threat to the societal and economic development throughout the world. Therefore a rapid, sensitive, and easy-to-use test for viral infections is essential to prevent and to control such viral pandemics. Furthermore, a compact, portable device is potentially very useful in remote or developing regions without easy access to sophisticated laboratory facilities.

The technique is better than traditional methods such as PCR (polymerase chain reaction) because of its speed and ease of use without compromising sensitivity. In principle, with a device such as this, minimal pre-processing of samples is required, and one could imagine having several different, interchangeable, detection modules for rapid detection. It’s also possible to consider configuring the device to detect multiple analytes.

This sensor device is developed during the PhD project of Aurel Ymeti, financed by the STW Dutch Technology Foundation, in collaboration with several companies including Paradocs Group BV, bioMériex BV, and LioniX BV. The research is part of two research institutes within the University of Twente: MESA+ Institute for Nanotechnology and BMTI Institute for BioMedical Technology. A commercial prototype of this sensor is being developed by a Dutch company.