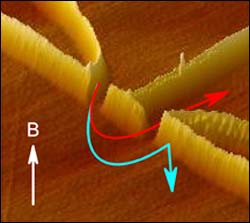 Purdue University physicists have built a critical component for the development of quantum computers and spintronic devices, potentially bringing advances in cryptography and high-speed database searches a step closer.


A team of researchers including Leonid P. Rokhinson has created a device that can effectively split a stream of quantum objects such as electrons into two streams according to the spin of each, herding those with “up” spin in one direction and corralling those that spin “down” in another. By producing such “spin-polarized” streams, the tiny device could become a key component in quantum computers, which have not yet left the drawing boards of the computer industry but are highly sought-after for their purported facility at cracking codes and searching large databases.

“For the first time, we have achieved spatial spin separation of the ’holes’ in gallium arsenide, the spaces that electrons leave behind as they travel through this semiconductor,” said Rokhinson, who is an assistant professor of physics in Purdue’s School of Science. “These holes also have spin characteristics, just as particles do, and separating them according to their spin has been a great challenge. Producing this effect will be critical for the success of any spin-based electronic device, and this separation method could be one of the missing links necessary for the development of quantum computers and non-volatile memory devices.” The research appears in the current issue of the journal Physics Review Letters.

Quantum computers, though still in the early stages of development, are highly desired because of their projected ability to solve particular kinds of difficult problems that often arise in cryptography and database searching. These problems often have a very large number of candidate solutions, most of which are incorrect and must be quickly eliminated from the solution pool.

Even the fastest conventional computers, which must test each potential solution before moving on to another, can take an inordinately long time to winnow out the incorrect candidates. But a quantum computer could theoretically test the solutions simultaneously – a process computer scientists refer to as parallel processing. Rokhinson said this is because of a peculiar quantum physical property of particles called entanglement. “Two electrons – one that has ’up’ spin, the other with ’down’ – can be entangled so that anything that affects one affects the other,” he said. “The particles remain entangled even if they are separated by great distances.”

The two particles’ respective spins, which are opposite but inextricably linked, allow them to form a ’quantum bit,’ or qubit, that can actually be ’on’ and ’off’ simultaneously, or function as both a one and a zero during digital calculations. This ability to represent two conditions at once, multiplied many times over within a computer chip that uses a large number of qubits, could be a powerful tool for sifting through information.

“The trouble is, you have to find a way to measure the final quantum state of the qubit after the calculations have been made to extract useful information from them,” Rokhinson said. “Only once you have separated them can you obtain the answer to your calculations. This measurement issue has been one of the big challenges of the field.”

Some of the reason behind this difficulty lies in the very weak coupling of spin with the environment. In semiconductor materials, Rokhinson said, spin is coupled many trillions of times less than charge is, and spin experiences comparatively little influence from nearby matter.

“In practical terms, this means you can try to make a particle flip its spin from ’up’ to ’down,’ but it won’t feel you pushing,” he said. “Researchers have tried to polarize the particles using everything from light waves to strong magnetic fields, but nothing was working well enough to separate them.”

However, Rokhinson’s team discovered that semiconductors made of highly purified gallium arsenide sandwiched between layers of aluminum gallium arsenide possessed a natural property that, when harnessed, could push the quantum spaces, or ’holes,’ into two different directions according to their spin state.

“Although it may seem counterintuitive, the holes have a spin state as well,” Rokhinson said. “The spaces don’t literally spin – the idea of spin is just a loose metaphor anyway, to help physicists imagine what’s going on. In an electric current flowing through a copper wire, we imagine electrons jumping from one copper atom’s orbital hole to another. We could also imagine those holes having a positive charge and flowing in the opposite direction. A similar concept is at work here with spin state – we’re just working with the holes this time, not the particles.”

It is a natural property of the holes within the semiconductor that Rokhinson’s group has harnessed to divide them up, which could make life simpler for the chip designers who may someday put this hole-herder to use. “The large magnetic fields needed for other methods of spin measurement are not necessary in this device,” Rokhinson said. “However, it requires very low temperatures, a fraction of a degree above absolute zero. We will probably need to reproduce the effect at higher temperatures for chips based on this technology to become commercially worthwhile.”

But with further development, Rokhinson said, the device might form a key element in a quantum microprocessor. “All spin-based processors require devices that can inject, detect and manipulate particles,” he said. “This device can both inject and detect them, and since we already have some knowledge about manipulating particles, it could mean that a major hurdle in the way of developing spintronics devices has been overcome.”

Rokhinson said his team would be concentrating on creating a device that also could manipulate the electron holes as well, thus accomplishing all three necessary tasks with a single component. “That would allow us to create a spin-based transistor,” he said. “Because semiconductor transistors have had such a dramatic impact on the last few decades of computer development, we are optimistic that this discovery could be significant for the industry.”

This research is supported in part by the Defense Advanced Research Projects Agency and the National Science Foundation.