Going to Mercury? Don’t leave home without a NIST calibration 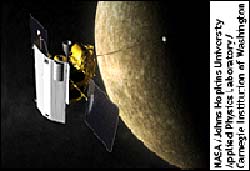 Artist’s impression of the MESSENGER spacecraft in orbit around Mercury.

The first spacecraft intended to orbit Mercury was launched on Aug. 3, 2004, carrying an instrument for mapping the composition of the planet’s crust that was calibrated with a novel procedure at the National Institute of Standards and Technology (NIST). The procedure, using NIST-produced, high-energy gamma rays, enabled the device to be prepared for the same intense radiation levels typically produced in outer space.

Mercury is a rocky planet like the Earth but smaller, denser and with an older surface. Scientists believe that by studying Mercury they can develop a better understanding of how the Earth formed, evolved and interacts with the Sun.

Scheduled to orbit Mercury in 2011, the National Aeronautics and Space Administration’s (NASA) MESSENGER (MErcury Surface, Space ENvironment, GEochemistry, and Ranging) spacecraft carries seven scientific instruments, including a detector that will measure gamma rays emitted by Mercury’s crust as it is bombarded by cosmic rays. The bombardment releases neutrons, which react with the elements in the crust; analysis of the resulting gamma rays will help identify the elements. The detector’s efficiency (the fraction of incoming gamma rays detected) needed to be calibrated based on the gamma-ray energy for 37 different orientation angles associated with the orbits around the planet. Typical gamma ray sources, such as those used for medical treatments, emit at lower energy levels than those needed for the calibration.

NIST scientists, in collaboration with the mission’s prime contractor, the Johns Hopkins University Applied Physics Laboratory, solved the calibration problem by using a high-intensity neutron beam to irradiate targets made of sodium chloride and chromium. The targets captured neutrons and emitted gamma rays, which were measured by MESSENGER’s gamma-ray detector. These gamma rays spanned the energy range that will be measured in the planetary assay. According to Johns Hopkins’ Edgar A. Rhodes — lead scientist for the MESSENGER instrument –the calibration procedure “will likely set a new standard for space-flight gamma-ray spectrometers.”