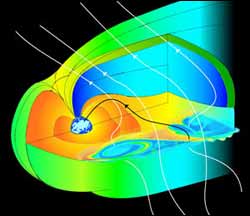 A bevy of satellites buzzing around in the Earth’s magnetosphere has found at least part of the answer to a long-standing puzzle about the source of the charged particles that feed the aurora.


The charged particles come from explosions on the sun and smash into the Earth’s magnetic field, which repels the bulk of them. But many slip through, often via a physical process called magnetic reconnection, where the magnetic field traveling with the particles breaks and reconnects with the Earth’s field, opening a window for the particles to surge through. Once inside, these excited particles can spiral down toward the poles and create brilliant auroras when they hit the atmosphere.

But magnetic reconnection happens only when the solar wind’s magnetic field direction is 180 degrees opposite from that of the magnetic field of the Earth. When the two fields are aligned, there is no obvious physical process allowing entry of charged particles, at least at the leading edge of the Earth’s magnetosphere.

Three years ago, however, the four satellites of the Cluster mission, operated by the European Space Agency (ESA), passed through the tail of the Earth’s magnetic field, which stretches hundreds of thousands of miles in the shadow of the Earth, and observed a new process that could allow entry of the solar wind particles.

“The Kelvin-Helmholtz instability has often been ignored as an important solar wind entry process,” said Tai Phan, a space physicist at the University of California, Berkeley’s Space Sciences Laboratory and a co-author of the paper. “Thanks to its multi-spacecraft measurements, Cluster has now proven the existence of these large-scale vortices that could lead to substantial entry of solar wind to populate the Earth’s magnetosphere.”

Phan, lead-author Hiroshi Hasegawa of Dartmouth College, New Hampshire, and their colleagues in Japan and Europe report their conclusions in the Aug. 12 issue of Nature.

A solar wind of charged particles blows incessantly past the Earth, compressing its magnetic field and pulling it into a teardrop shape pointing away from the sun. Periodic solar storms pump up the wind and send more particles toward Earth, which create atmospheric disturbances – auroras, magnetic storms, and radiation belt storms – that can affect satellites as well as radio communications. The goal of the Cluster mission and numerous other Earth satellites is to understand how space weather affects the Earth environment.

One big question is how these charged particles penetrate the protective magnetic field and fill up the magnetic bubble around Earth, and what triggers these particles to suddenly flame down onto the poles, creating colorful auroras. Magnetic reconnection explains the entry of charged particles when the solar wind magnetic field is anti-parallel to the Earth’s field, but when the fields are parallel, they should present an impenetrable barrier to this flow. Spacecraft measurements dating to 1987 clearly show, however, that the magnetosphere is three to five times fuller when the fields are aligned than when they are not. So how is the solar wind getting in?

Part of the answer came on Nov. 20, 2001, when the Cluster flotilla was heading around from behind the Earth and had just arrived at the dusk side of the planet, where the solar wind slides past the Earth’s magnetosphere. There it began to encounter gigantic vortices of gas at the magnetopause, the outer edge of the magnetosphere.

“People have seen waves on the surface of the magnetosphere, but they couldn’t tell if they were small ripples or crashing, rolling waves,” Phan said. “You have to have big vortices to get the solar wind inside.”

“These vortices were really huge structures, about six Earth radii across,” said Hasegawa. The team’s results place the size of the vortices at almost 40,000 kilometers each.

These vortices are products of non-linear Kelvin-Helmholtz instability, which occur when two adjacent flows travel past each other at different speeds and the friction between them kicks up eddies and vortices. Examples of such instabilities are the waves whipped up by the wind slipping across the surface of the ocean. When a KHI-wave rolls up into a vortex, it becomes known as a “Kelvin Cat’s eye.” The data collected by Cluster have shown density variations of the electrified gas at the magnetopause precisely like those expected when traveling through a Kelvin Cat’s eye.

Scientists had postulated that, if these structures were to form at the magnetopause, they might be able to pull large quantities of the solar wind inside the magnetosphere as they collapse. Once the solar wind particles are carried into the inner part of the magnetosphere, they can be excited strongly, allowing them to smash into the Earth’s atmosphere and give rise to the auroras.

Cluster’s discovery strengthens this scenario but does not show the precise mechanism by which the gas is transported into the Earth’s magnetic bubble. Thus, scientists still do not know whether this is the only process to fill up the magnetosphere when the magnetic fields are aligned. For those measurements, Hasegawa said, scientists will have to wait for a future generation of magnetospheric satellites.

Phan, in fact, suspects there are other mechanisms that allow entry of solar wind particles when the solar wind and Earth’s field’s are parallel. Detection last year by UC Berkeley scientists of a proton aurora over the Earth’s poles may indicate that magnetic reconnection around the Earth’s polar regions, instead of at the bow of the magnetosphere, can allow particles in.

The Cluster satellites, built by ESA with significant participation from the National Aeronautics and Space Administration, were launched in summer 2000. The Cluster mission investigates three-dimensional structures throughout the Earth’s magnetosphere and solar wind. NASA supports U.S.-based researchers associated with the mission.