Home / Physics and Astronomy / Swift Satellite To Catch Mysterious Bursts From Deep In The Cosmos
30.07.2004

Swift Satellite To Catch Mysterious Bursts From Deep In The Cosmos 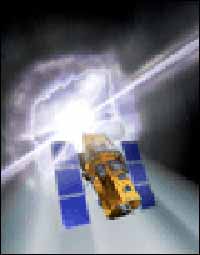 The NASA Swift satellite, which will pinpoint the location of distant yet fleeting explosions that appear to signal the births of black holes, is due to arrive at the Kennedy Space Centre in Florida today in preparation for an October launch. UK scientists, from the University of Leicester and University College London’s Mullard Space Science Laboratory, have provided key technology for two of the instruments on Swift.

Professor Alan Wells from the University of Leicester, UK Lead Investigator for the X-ray Telescope onboard Swift, is eagerly awaiting the launch and the start of the mission to track these enigmatic flashes called gamma-ray bursts.

“Swift is an awe-inspiring mission – tracking down what are the fastest and most powerful events in the Universe. UK scientists have lead roles in two of the three instruments – the X-ray telescope and the UV/Optical telescope which both use new technologies that we have developed in our laboratories. These telescopes will provide unique information on these bursts to help us unravel what is going on in these amazing cosmological events.”

Gamma-ray bursts are the most powerful explosions known in the Universe, emitting more than one hundred billion times the energy that the Sun emits in an entire year. Yet they last only a few milliseconds to a few minutes. However, in most bursts, an afterglow phenomenon frequently follows the initial gamma-ray flash in which emission of X-rays, optical light and radio waves continues, sometimes for hours to weeks after the initial burst has subsided.

The Swift satellite is named after the nimble migratory bird, because it can swiftly dart around the sky and catch the burst “on the fly” to study both the burst and its afterglow. “Gamma-ray bursts have ranked among the biggest mysteries in astronomy since their discovery over 35 years ago,” said Dr. Neil Gehrels, Swift Lead Scientist from NASA’s Goddard Space Flight Centre in Greenbelt, Maryland. “Swift is just the right tool needed to solve this mystery. One of Swift’s instruments will detect the burst, while, within a minute, two higher-resolution telescopes will be swung round for an in-depth look. Meanwhile, Swift will ’e-mail’ scientists and telescopes around the world to observe the burst in real-time.”

The Burst Alert Telescope (BAT), built by NASA Goddard, will detect and locate about two gamma-ray bursts per week, relaying a 1- to 4-arc-minute position to the ground within about 20 seconds. This position will then be used to “swiftly” steer the satellite to point the X-ray Telescope (XRT), built by Penn State University, the University of Leicester and the Osservatorio Astronomico di Brera, Italy and the UltraViolet/Optical Telescope (UVOT), from Penn State and University College, London’s Mullard Space Science Laboratory, directly at the burst position.

These two longer-wavelength (lower-energy) instruments will then rapidly pin-point the position of the burst to arc-second accuracy (needed for other ground-based telescopes to find it) and then measure the red-shift, or distance, to the burst source and follow the decay of the afterglow. This is important because the afterglow provides crucial information about the dynamics of the burst and the effects these vast explosions have on gas clouds in nearby galaxies and interstellar space.

Theorists have suggested that some bursts may originate from the first generation of stars in the early Universe, and Swift’s unprecedented sensitivity will provide the first opportunity to test this hypothesis.

Some types of bursts are linked with the death of massive stars but others may signal the merger of neutron stars or black holes orbiting each other in exotic binary star systems. Swift will determine whether there are different classes of gamma-ray bursts associated with different processes by which bursts are created. So far, afterglows have only been seen for bursts lasting longer than two seconds but Swift may be fast enough to identify afterglows from short bursts, if they exist. “We may be seeing only half the story so far,” said Gehrels.

Every time a burst is detected, Swift notifies a wide community, ranging from astronomers at world-class observatories to university and schools science classes and even public visitors at science centres and museums – via the Goddard-maintained Gamma-ray Burst Coordinates Network (GCN). The UK-based Faulkes Telescope Project, with telescopes in Hawaii and Australia forms part of a network of dedicated ground-based robotic telescopes distributed around the world that await Swift-GCN alerts, along with the European Southern Observatory’s Very Large Telescope in Chile.

“Some bursts likely originate from the farthest reaches, and hence earliest epoch, of the Universe,” said Swift Mission Director John Nousek, professor of astronomy and astrophysics at Penn State. “They act like beacons shining through everything along their paths, including the gas between and within galaxies along the line of sight.”

The Swift team expects to detect and analyze over 100 bursts a year. When not catching gamma-ray bursts, Swift will conduct an all-sky survey at high-energy “hard” X-ray wavelengths, which will be 20 times more sensitive than previous measurements. Scientists expect that Swift’s enhanced sensitivity relative to earlier surveys will uncover over 400 new supermassive black holes.

Swift, a medium-class Explorer mission, is managed by NASA’s Goddard Space Flight Center in Greenbelt, Md., Swift was built in collaboration with national laboratories, and universities, including the Los Alamos National Laboratory, Penn State University, Sonoma State University, and international partners, in Italy, and the University of Leicester and University College’s Mullard Space Science Laboratory in the UK.

The UK contribution to the cost of the instruments has been funded through the Particle Physics and Astronomy Research Council.