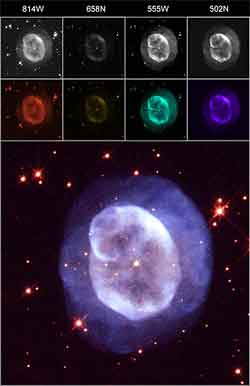 This previously unreleased colour image of the planetary nebula NGC 5979 was combined from raw FITS files with the ESA/ESO/NASA Photoshop FITS Liberator. In the top row the raw greyscale images are seen. Four individual exposures were combined to form this colour image and the colour filters for the individual exposures are indicated. The number refers to the colour;; or wavelength;; of light that the filter allows through. This is measured in nanometres (a millionth of a millimetre). The N’s and W’s in the filter name refer to whether the filter is a narrow-band (N) or a wide-band filter (W). The second row shows the individual exposures after a colorising layer has been applied in Photoshop. Image credit: ESA;; ESO and NASA

If there is anything that unites astronomy, it is the worldwide use of a single file format – nearly all the images of stars and galaxies produced by telescopes on the ground and in space are stored as so-called FITS files. Unfortunately this file format has been accessible to very few people other than professional scientists using highly specialised image-processing tools.

Now a new and unique tool – the ESA/ESO/NASA Photoshop FITS Liberator – developed by imaging scientists at the European Space Agency, the European Southern Observatory and NASA makes the immense wealth of astronomical images and spectra stored in data archives around the world accessible to the layman. The only thing required is access to either Adobe Photoshop® or Adobe Photoshop Elements®, both leading image software packages.

For the professional creators of astronomical colour images, the plug-in revolutionises the workflow of the creation of colour images from raw data and gives a huge boost to the image quality by giving access to the full 16 bit (65536 colours) range of the observations. In addition the plug in may be used as a powerful educational tool when teaching about light, colour and digital images. Some examples of educational material are available at the web page below.

The ESA/ESO/NASA Photoshop FITS Liberator will be released today and is freely available for download from:

Head of the development team, Lars Holm Nielsen from Denmark, says, “FITS is much more than just an image format. It is an extremely flexible file format that allows astronomers to share images and spectra in many different ways. This very versatility has made the job of producing a plug-in for Photoshop challenging. Compared to formats like JPEG, FITS files can be incredibly diverse.”