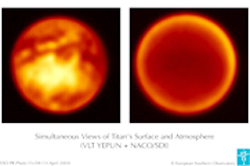 A University of Arizona astronomer and his collaborators are using a novel camera to hunt for extrasolar planets.

The project is being funded over the next five years by a $545,000 National Science Foundation award. NSF awarded the highly competitive Faculty Early Career Development (CAREER) grant to Associate Professor Laird M. Close. The CAREER program is a foundation-wide activity that offers the NSF’s most prestigious awards for new faculty members. The CAREER program recognizes and supports the early career-development activities of those teacher-scholars who are most likely to become the academic leaders of the 21st century.

Close and his graduate students, Beth Biller and Eric Nielsen, will use Close’s custom SDI (Simultaneous Differential Imager) cameras on two big telescopes in Arizona and Chile to hunt for planets orbiting other stars.

Astronomers have indirectly detected more than 100 planets circling stars in other solar systems, but none have yet been directly imaged. Close plans to solve the problem of detecting faint planets near their billion-times-brighter stars by using a unique, high-contrast, SDI camera. The camera uses adaptive optics, which remove the blurring effects of the Earth’s atmosphere and produce extremely sharp images.

The SDI camera splits light from a single object into four identical images, then passes the resulting beams through four slightly different methane-sensitive filters. When the filtered light beams hit the detector array, astronomers can subtract the images so the bright star disappears, revealing the massive, methane-rich planet.

Professor Close and his collaborators will use SDI to examine 100 young northern- and southern-hemisphere stars that are near Earth. They will hunt for planets as small as 3 Jupiter masses (three times the mass of Jupiter) that are as close as 5 AU from their stars. This is about the distance between Jupiter and the sun. One “AU,” or astronomical unit, is the distance between Earth and the sun.

The northern SDI camera will be used on the 6.5-meter, UA/Smithsonian, MMT telescope on Mount Hopkins, Ariz, in collaboration with Steward Observatory astronomer Donald McCarthy. The southern SDI camera has been installed at the European Southern Observatory’s (ESO) 8.2-meter Very Large Telescope (VLT) in Chile. Astronomers Rainer Lenzen and Wolfgang Brandner of the Max-Planck-Institut für Astronomie (MPIA), Heidelberg, Germany, and Markus Hartung of ESO collaborate on this project.

“Our imaging technique should be about 100 times more sensitive than current imaging technologies,” Close said. “This will allow us to directly detect sub-stellar companions to nearby stars. It also will allow us to look for planets in regions where we have not been able to search before but that are likely to be rich with massive planets,” he added. “If we find such planets, they can help tell us if those stars have Earth-like planets.”

In collaboration with Mark McCaughrean of the Astrophysical Institute Potsdam, Close and his German colleagues discovered a 27 Jupiter mass object named Epsilon Indi Bb the first night they used the camera. They reported the finding the Journal Astronomy & Astrophysics.

Epsilon Indi Bb is a methane-rich object a mere 12 light years from the sun and just 2.6 AU away from a 43 Jupiter-mass object. Epsilon Indi Ba, that McCaughrean and others reported in another paper in 2003.

“Although a bit too massive to be a true planet, Epsilon Indi Bb is just slightly hotter than a convection oven,” Close said. “It is the coolest, closest binary ’brown dwarf’ ever imaged.”

Brown dwarfs are too small to shine like a star but too big to be called planets.

“This discovery will play an important role in understanding the nature and physics of brown dwarfs,” Close said.

Last February, during commissioning of the SDI camera in Chile, Hartung, Close and their European colleagues produced the sharpest images ever taken of Saturn¹s largest moon, Titan.

One of the super-sharp images shows red surface features and dark surface areas on the moon, which is ringed with a haze of Titan’s methane-rich atmosphere, shown as blue.

The image has a 360 kilometer resolution at the distance of Saturn, then at about 8.5 AU from Earth. That is, the SDI camera resolves a 200-mile distance on Titan from about 800 million miles away.

“The ’red’ features may be the icy surface of Titan,” Close said. “The dark areas may be liquid methane and ethane lakes.”

Hartung has also made a movie of Titan rotating, based on SDI data. It is online at http://www.eso.org/outreach/press-rel/pr-2004/video/vid-06-04.avi

The Journal Astronomy & Astrophysics will publish a 2004 paper by Hartung, Tom Herbst of MPIA, and the rest of the SDI team on these Titan images.