Venus Transit 2004: Be Ready for a Once-In-A-Lifetime Chance! 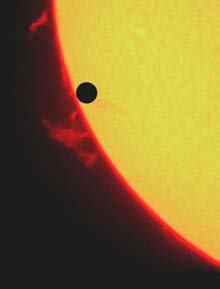 Tomorrow, on June 8, beginning shortly after 5 hrs UT, a large part of the world will be sharing a unique sight never seen by any person now living. During a little more than six hours, planet Venus will cross the face of the Sun, offering a wonderful show for everybody to admire. Nobody should miss the opportunity to witness this great event! And – good luck! – it appears that the observing condition prospects are rather favourable in large areas of the world.

Nevertheless, should you be as unlucky as astronomer Le Gentil in 1769 who, having traversed a large portion of the globe, enduring all the perils of a long sea-voyage, and waiting for 8 years for the transit to occur, was unable to observe it because of a vexatious, black cloud that covered the Sun, you need not despair. There will be ample opportunity to witness this event from the VT-2004 Central Display page (and other websites).

This page, powered by Akamai and therefore mirrored on many hundreds of sites all over the world, will offer selected images from the event, acquired by our colleagues at the large solar telescopes, from the Canary Island to China. All images will be chosen and commented live by a team of professional astronomers in the “VT-2004 Control Room” at the ESO headquarters (Garching, Germany), who will guide you through the various phases of this memorable event and provide a running commentary, beginning before dawn (in Central Europe) on the Day of the Transit and only ending when Venus is well beyond the solar disc.

At the same time, you will be able to follow the progress of the absolutely unique VT-2004 Observing Campaign set up by this programme. More than 1700 groups of observers (school classes, amateur astronomers and individuals) have already registered and will be providing timings of the “contacts” of Venus’ black circle with the Solar disc. This allows the VT-2004 computers to reenact live the measurement of the distance from the Earth to the Sun (the “Astronomical Unit”), as this was done by astronomers in the past centuries.

On the VT-2004 Central Display web site, you will also find what is without doubt the most exhaustive list of links to other websites where photos and webcasts of the Venus Transit are expected to appear in (near-)real-time (weather permitting). Better than all the channels on your satellite TV!

And during the less dramatic moments, you will be able to browse through the wonderful photos or the collection of drawings related to the Venus Transit at the VT-2004 website. In the Photo Archive, you can see many beautiful images captured by amateurs and professionals of the varying phases of planet Venus as well as of the Sun. You will discover very rare, recent images of Venus looking almost like a circle, a sight very difficult to achieve since it is only visible when Venus is extremely close to the Sun in the sky. In the Gallery, you will find a wealth of fine drawings by young people from all over Europe, reflecting their impressions on how the Venus Transit will look for them.

All in all, the VT-2004 website at http://www.vt-2004.org, is an extremely comprehensive, very complete source of live information on the Venus Transit, obtained in a vast collaboration of many people all over the Earth. If nevertheless, you still do not find some information here, feel free to ask a question to the organizers by sending an email to vt-2004@eso.org or by posting it on the VT-2004 Forum.