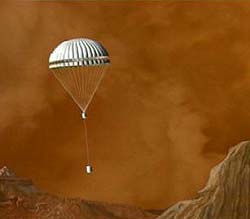 When ESA’s Huygens spaceprobe, travelling on board NASA’s Cassini spacecraft en route to Saturn, lands on the planet’s largest moon Titan in January 2005, not only will it carry a variety of scientific instruments, but also music ‘made in Europe’.

Four musical themes composed by French musicians Julien Civange and Louis Haéri were placed on board ESA’s Huygens probe in October 1997. After a seven-year and 4000 million kilometre journey, the music will reach Titan on 14 January 2005. This will be the furthest distance at which human-made sounds will have landed on another celestial body.
The four songs, namely ‘Hot time’, ‘Bald James Deans’, ‘Lalala’ and ‘No love’ were recorded in 1997 at the Sony Studios in New York City under the direction of producer Kirk Yano. The recorded versions on board the spacecraft last for 12 minutes.

The purpose of putting music on the spacecraft is to strengthen the knowledge of ESA’s Huygens mission to Titan, by aiming to leave a trace of our humanity in the unknown and to build awareness about this adventure, especially among young people.

Musician Julien Civange, of the Siliwood-Music2Titan project, said: “Music2Titan reflects our will to embellish Earth and space with unconventional artistic projects, as well as to familiarise youngsters with space missions and the search for traces of extraterrestrial life, communicate about space science outside a scientific framework, and disseminate dreams.”

While waiting to discover the music when Huygens lands on Titan, Siliwood already invites you to go to Music2Titan.com

The Cassini-Huygens mission is a co-operation between NASA, ESA and ASI, the Italian space agency.