Home / Physics and Astronomy / Biggest ever solar flare was even bigger than thought
16.03.2004

Biggest ever solar flare was even bigger than thought 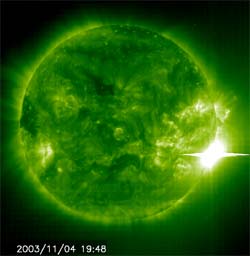 Physicists in New Zealand have shown that last November’s record-breaking solar explosion was much larger than previously estimated, thanks to innovative research using the upper atmosphere as a gigantic x-ray detector. Their findings have been accepted for 17 March publication in Geophysical Research Letters, published by the American Geophysical Union.

On 4 November 2003, the largest solar flare ever recorded exploded from the Sun’s surface, sending an intense burst of radiation streaming towards the Earth. Before the storm peaked, x-rays overloaded the detectors on the Geostationary Operational Environmental Satellites (GOES), forcing scientists to estimate the flare’s size.

Taking a different route, researchers from the University of Otago used radio wave-based measurements of the x-rays’ effects on the Earth’s upper atmosphere to revise the flare’s size from a merely huge X28 to a “whopping” X45, say researchers Neil Thomson, Craig Rodger, and Richard Dowden. X-class flares are major events that can trigger radio blackouts around the world and long-lasting radiation storms in the upper atmosphere that can damage or destroy satellites. The biggest previous solar flares on record were rated X20, on 2 April 2001 and 16 August 1989.

“This makes it more than twice as large as any previously recorded flare, and if the accompanying particle and magnetic storm had been aimed at the Earth, the damage to some satellites and electrical networks could have been considerable,” says Thomson. Their calculations show that the flare’s x-ray radiation bombarding the atmosphere was equivalent to that of 5,000 Suns, though none of it reached the Earth’s surface, the researchers say.

At the time of the flare, the researchers were probing the ionosphere with radio waves as part of a long-term research program. Their new measurement comes from observations of the indirect effects of the increased x-ray radiation on very low frequency (VLF) radio transmissions across the Pacific Ocean from Washington State, North Dakota, and Hawaii to their receivers in Dunedin, New Zealand.

“Increases in x-rays enhance the ionosphere, causing its lowest region to decrease in altitude, which in turn affects the phase of VLF transmissions. Our previous research shows that these phase shifts are proportional to the number of kilometers [miles] by which the ionosphere is lowered,” they say. As the lowering is known to relate directly to the amount of x-ray radiation present, the team could make a new measurement of the flare’s size, they say.

“We were at the right place, at the right time with the right knowledge–which was based on nearly 15 years of work by staff and students in the Physics Department’s Space Physics Group.” The research would not have been possible, they added, without data provided by the U.S. National Oceanic and Atmospheric Administration (NOAA) Space Environment Center, which came up with the initial X28 estimate.

“We used their solar measurements to calibrate the response of the atmosphere to x-rays, so when this event overloaded the satellite detectors, we were in a unique position to make this measurement. Given that any future flares are unlikely to be large enough to overload the ionosphere, we believe that our new method has great advantages in determining their size in the event of satellite detector overloads,” they say.