Hubble’s deepest view ever of the Universe unveils earliest galaxies 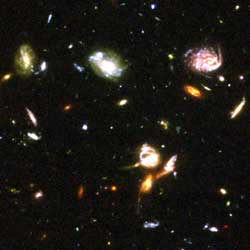 Here three galaxies just below centre are enmeshed in battle, their shapes distorted by the brutal encounter. <br>Credits: NASA, ESA, and S. Beckwith (STScI) and the HUDF Team

Astronomers today unveiled the deepest portrait of the visible Universe ever achieved by humankind. Called the Hubble Ultra Deep Field (HUDF), the million-second-long exposure reveals the first galaxies to emerge from the so-called ’dark ages’, the time shortly after the ’Big Bang’ when the first stars reheated the cold, dark Universe. The new image should offer unprecedented insights into what types of objects reheated the Universe long ago.

This historic new view is actually made up by two separate images taken by Hubble’s Advanced Camera for Surveys (ACS) and the Near Infrared Camera and Multi-object Spectrometer (NICMOS). Both images reveal some galaxies that are too faint to be seen by ground-based telescopes, or even in Hubble’s previous faraway looks, called the Hubble Deep Fields (HDFs), taken in 1995 and 1998.

The HUDF field contains an estimated 10,000 galaxies in a patch of sky just one-tenth the diameter of the full Moon. Besides the rich harvest of classic spiral and elliptical galaxies, there is a zoo of oddball galaxies littering the field. Some look like toothpicks; others like links on a bracelet. A few appear to be interacting. Their strange shapes are a far cry from the majestic spiral and elliptical galaxies we see today. These oddball galaxies chronicle a period when the Universe was more chaotic. Order and structure were just beginning to emerge.

The combination of ACS and NICMOS images will be used to search for galaxies that existed between 400 and 800 million years after the Big Bang (in cosmological terms this corresponds to a ’redshift’ range of 7 to 12). Astronomers around the world will use these data to understand whether in this very early stages the Universe appears to be the same as it did when the cosmos was between 1000 and 2000 million years old.

Hubble’s ACS allows astronomers to see galaxies two to four times fainter than Hubble could view previously, but the NICMOS sees even farther than the ACS. The NICMOS reveals the farthest galaxies ever seen because the expanding Universe has stretched their light into the near-infrared portion of the spectrum. The ACS uncovered galaxies that existed 800 million years after the Big Bang (at a redshift of 7). But the NICMOS might have spotted galaxies that lived just 400 million years after the birth of the cosmos (at a redshift of 12).

Just like the previous HDFs, the new data are expected to galvanise the astronomical community and lead to dozens of research papers that will offer new insights into the birth and evolution of galaxies. This will hold the record as the deepest-ever view of the Universe until ESA together with NASA launches the James Webb Space Telescope in 2011.