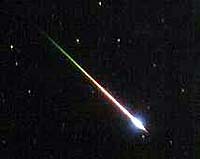 Ann Nguyen chose a risky project for her graduate studies at Washington University in St. Louis. A university team had already sifted through 100,000 grains from a meteorite to look for a particular type of stardust — without success.

In 2000, Nguyen decided to try again. About 59,000 grains later, her gutsy decision paid off. In the March 5 issue of Science, Nguyen and her advisor, Ernst K. Zinner, Ph.D., research professor of physics and of earth and planetary sciences, both in Arts & Sciences, describe nine specks of silicate stardust — presolar silicate grains — from one of the most primitive meteorites known.

“Finding presolar silicates in a meteorite tells us that the solar system formed from gas and dust, some of which never got very hot, rather than from a hot solar nebula,” Zinner says. “Analyzing such grains provides information about their stellar sources, nuclear processes in stars, and the physical and chemical compositions of stellar atmospheres.”

In 1987, Zinner and colleagues at Washington University and a group of scientists at the University of Chicago found the first stardust in a meteorite. Those presolar grains were specks of diamond and silicon carbide. Although other types have since been discovered in meteorites, none were made of silicate, a compound of silicon, oxygen and other elements such as magnesium and iron.

“This was quite a mystery because we know, from astronomical spectra, that silicate grains appear to be the most abundant type of oxygen-rich grain made in stars,” Nguyen says. “But until now, presolar silicate grains have been isolated only from samples of interplanetary dust particles from comets.”

Our solar system formed from a cloud of gas and dust that were spewed into space by exploding red giants and supernovae. Some of this dust formed asteroids, and meteorites are fragments knocked off asteroids. Most of the particles in meteorites resemble each other because dust from different stars became homogenized in the inferno that shaped the solar system. Pure samples of a few stars became trapped deep inside some meteorites, however. Those grains that are oxygen-rich can be recognized by their unusual ratios of oxygen isotopes.

Nguyen, a graduate student in earth and planetary sciences, analyzed about 59,000 grains from Acfer 094, a meteorite that was found in the Sahara in 1990. She separated the grains in water instead of with harsh chemicals, which can destroy silicates. She also used a new type of ion probe called the NanoSIMS (Secondary Ion Mass Spectrometer), which can resolve objects smaller than a micrometer (one millionth of a meter).

Zinner and Frank Stadermann, Ph.D., senior research scientist in the Laboratory for Space Sciences at the university, helped design and test the NanoSIMS, which is made by CAMECA in Paris. At a cost of $2 million, Washington University acquired the first instrument in the world in 2001.

Ion probes direct a beam of ions onto one spot on a sample. The beam dislodges some of the sample’s own atoms, some of which become ionized. This secondary beam of ions enters a mass spectrometer that is set to detect a particular isotope. Thus, ion probes can identify grains that have an unusually high or low proportion of that isotope.

Unlike other ion probes, however, the NanoSIMS can detect five different isotopes simultaneously. The beam can also travel automatically from spot to spot so that many hundreds or thousands of grains can be analyzed in one experimental setup. “The NanoSIMS was essential for this discovery,” Zinner says. “These presolar silicate grains are very small — only a fraction of a micrometer. The instrument’s high spatial resolution and high sensitivity made these measurements possible.”

Using a primary beam of cesium ions, Nguyen painstakingly measured the amounts of three oxygen isotopes — 16O, 17O and 18O — in each of the many grains she studied. Nine grains, with diameters from 0.1 to 0.5 micrometers, had unusual oxygen isotope ratios and were highly enriched in silicon. These presolar silicate grains fell into four groups. Five grains were enriched in 17O and slightly depleted in 18O, suggesting that deep mixing in red giant or asymptotic giant branch stars was responsible for their oxygen isotopic compositions.

One grain was very depleted in 18O and therefore was likely produced in a low-mass star when surface material descended into areas hot enough to support nuclear reactions. Another was enriched in 16O, which is typical of grains from stars that contain fewer elements heavier than helium than does our sun. The final two grains were enriched in both 17O and 18O and so could have come from supernovae or stars that are more enriched in elements heavier than helium compared with our sun.

By obtaining energy dispersive x-ray spectra, Nguyen determined the likely chemical composition of six of the presolar grains. There appear to be two olivines and two pyroxenes, which contain mostly oxygen, magnesium, iron and silicon but in differing ratios. The fifth is an aluminum-rich silicate, and the sixth is enriched in oxygen and iron and could be glass with embedded metal and sulfides.

The preponderance of iron-rich grains is surprising, Nguyen says, because astronomical spectra have detected more magnesium-rich grains than iron-rich grains in the atmospheres around stars. “It could be that iron was incorporated into these grains when the solar system was being formed,” she explains.

This detailed information about stardust proves that space science can be done in the laboratory, Zinner says. “Analyzing these small specks can give us information, such as detailed isotopic ratios, that cannot be obtained by the traditional techniques of astronomy,” he adds.

Nguyen now plans to look at the ratios of silicon and magnesium isotopes in the nine grains. She also wants to analyze other types of meteorites. “Acfer 094 is one of the most primitive meteorites that has been found,” she says. “So we would expect it to have the greatest abundance of presolar grains. By looking at meteorites that have undergone more processing, we can learn more about the events that can destroy those grains.”