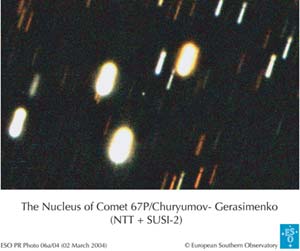 Before the launch, and as a salute to their colleagues at ESA, astronomers used the New Technology Telescope at the European Southern Observatory (ESO) of La Silla in Chile to image Rosetta’s target, Comet 67P/Churyumov-Gerasimenko, an approximately 4 kilometre size “dirty snowball” that orbits the Sun once every 6.6 years.

These new images show the object at a distance of approximately 670 million kilometres from the Sun – 4.5 times the distance from the Earth to the Sun.

These observations provide further confirmation that at this distance the activity on 67P/Churyumov-Gerasimenko is very low.

This is very good news for the mission, because it means that when Rosetta will meet in 2014 its target comet, at 790 million kilometres from the Sun, there will not be so much dust near the nucleus to hinder the landing.

Originally timed to begin about a year ago, Rosetta’s journey had to be postponed. This delay meant that the original mission’s target, Comet Wirtanen, which was observed two years ago by astronomers using ESO’s Very Large Telescope (see ESO PR Photo 06/02) could no longer be reached. Instead, a new target has been selected, Comet Churyumov-Gerasimenko.

The observations presented here are part of a continuous effort by astronomers to monitor Rosetta’s target and provide the spacecraft controllers and the astronomers with very useful, regular updates, e.g., about the ’cometary weather’ at the time of arrival.