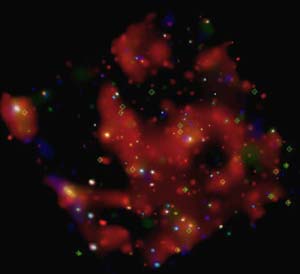 Mysterious, powerful X-ray sources found in nearby galaxies may represent a new class of objects, according to data from NASA’s Chandra X-ray Observatory. These sources, which are not as hot as typical neutron-star or black-hole X-ray sources, could be a large new population of black holes with masses several hundred times that of the sun.

Searching for quasisoft sources may be a new way to identify those X-ray sources most likely to be intermediate-mass black holes,” said Albert Kong of the Center for Astrophysics (CfA) and a member of the team.

The enigmatic objects found by the Chandra team are called “quasisoft” sources, because they have a temperature in the range of 1 million to 4 million degrees Celsius. On the one hand this temperature range is below the 10 million to 100 million-degree gas associated with “hard” X-ray sources, such as neutron stars or stellar-mass black holes. On the other hand the quasisoft-source temperatures are hotter than the several hundred-thousand-degree gas associated with “supersoft” X-ray sources due to white dwarfs.

Di Stefano and her colleagues determined the temperatures of individual X-ray emitting objects in four galaxies by measuring their X-ray spectra, or distribution of X-rays with energy. They found that between 15 percent and 20 percent of all detected sources fell in the quasisoft temperature range.

The power output of quasisoft sources is comparable to or greater than that of neutron stars or stellar-mass black holes fueled by the infall of matter from companion stars. This implies the region that produces the X-rays in a quasisoft source is dozens of times larger.

One possibility is the quasisoft sources represent standard neutron stars or stellar black holes where the associated hot gas cloud is, for some as yet unknown reason, much larger than usual. Or the quasisoft X-rays could be coming from the vicinity of intermediate-mass black holes having masses a hundred or more times greater than the mass of the sun. This would increase the diameter of the event horizon and could explain the larger sizes and lower temperatures associated with quasisoft sources.

As more quasisoft sources are discovered, the types of galaxies in which they reside and where they are located in a galaxy should give astronomers additional clues as to their nature. The present study indicates that they occur in various locations in elliptical as well as spiral galaxies.

TRW, Inc., was the prime development contractor for the observatory. The Smithsonian Astrophysical Observatory controls science and flight operations from the Chandra X-ray Center in Cambridge , Mass.