Home / Physics and Astronomy / VLT smashes the record of the farthest known galaxy
01.03.2004

VLT smashes the record of the farthest known galaxy 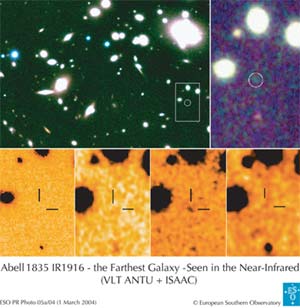 The photo shows an ISAAC image in the near-infrared of the core of the lensing cluster Abell 1835 (upper) with the location of the galaxy Abell 1835 IR1916 (white circle). The thumbnail images at the bottom show the images of the remote galaxy in the visible R-band (HST-WPC image) and in the J-, H-, and K-bands. The fact that the galaxy is not detected in the visible image but present in the others - and more so in the H-band - is an indication that this galaxy has a redshift around 10

Using the ISAAC near-infrared instrument on ESO’s Very Large Telescope, and the magnification effect of a gravitational lens, a team of French and Swiss astronomers [2] has found several faint galaxies believed to be the most remote known.

Further spectroscopic studies of one of these candidates has provided a strong case for what is now the new record holder – and by far – of the most distant galaxy known in the Universe.

Named Abell 1835 IR1916, the newly discovered galaxy has a redshift of 10 [3] and is located about 13,230 million light-years away. It is therefore seen at a time when the Universe was merely 470 million years young, that is, barely 3 percent of its current age.

This primeval galaxy appears to be ten thousand times less massive than our Galaxy, the Milky Way. It might well be among the first class of objects which put an end to the Dark Ages of the Universe.

This remarkable discovery illustrates the potential of large ground-based telescopes in the near-infrared domain for the exploration of the very early Universe.

Digging into the past

Like palaeontologists who dig deeper and deeper to find the oldest remains, astronomers try to look further and further to scrutinise the very young Universe. The ultimate quest? Finding the first stars and galaxies that formed just after the Big Bang.

More precisely, astronomers are trying to explore the last “unknown territories”, the boundary between the “Dark Ages” and the “Cosmic Renaissance”.

Rather shortly after the Big Bang, which is now believed to have taken place some 13,700 million years ago, the Universe plunged into darkness. The relic radiation from the primordial fireball had been stretched by the cosmic expansion towards longer wavelengths and neither stars nor quasars had yet been formed which could illuminate the vast space. The Universe was a cold and opaque place. This sombre era is therefore quite reasonably dubbed the “Dark Ages”.

A few hundred million years later, the first generation of stars and, later still, the first galaxies and quasars, produced intense ultraviolet radiation, gradually lifting the fog over the Universe.

This was the end of the Dark Ages and, with a term again taken over from human history, is sometimes referred to as the “Cosmic Renaissance”.

Astronomers are trying to pin down when – and how – exactly the Dark Ages finished. This requires looking for the remotest objects, a challenge that only the largest telescopes, combined with a very careful observing strategy, can take up.

With the advent of 8-10 meter class telescopes spectacular progress has been achieved during the last decade. Indeed it has since become possible to observe with some detail several thousand galaxies and quasars out to distances of nearly 12 billion light-years (i.e. up to a redshift of 3 [3]). In other words astronomers are now able to study individual galaxies, their formation, evolution, and other properties over typically 85 % of the past history of the Universe.

Further in the past, however, observations of galaxies and quasars become scarce. Currently, only a handful of very faint galaxies are seen approximately 1,200 to 750 million years after the Big Bang (redshift 5-7). Beyond that, the faintness of these sources and the fact their light is shifted from the optical to the near infrared has so far severely limited the studies.

An important breakthrough in this quest for the earliest formed galaxy has now been achieved by a team of French and Swiss astronomers [2] using ESO’s Very Large Telescope (VLT) equipped with the near-infrared sensitive instrument ISAAC. To accomplish this, they had to combine the light amplification effect of a cluster of galaxies – a Gravitational Telescope – with the light gathering power of the VLT and the excellent sky conditions prevailing at Paranal.

The hunt for such faint, elusive objects demands a particular approach.

First of all, very deep images of a cluster of galaxies named Abell 1835 were taken using the ISAAC near-infrared instrument on the VLT. Such relatively nearby massive clusters are able to bend and amplify the light of background sources – a phenomenon called Gravitational Lensing and predicted by Einstein’s theory of General Relativity.

This natural amplification allows the astronomers to peer at galaxies which would otherwise be too faint to be seen. In the case of the newly discovered galaxy, the light is amplified approximately 25 to 100 times! Combined with the power of the VLT it has thereby been possible to image and even to take a spectrum of this galaxy. Indeed, the natural amplification effectively increases the aperture of the VLT from 8.2 m to 40-80 m.

The deep near-IR images taken at different wavelengths have allowed the astronomers to characterise the properties of a few thousand galaxies in the image and to select a handful of them as potentially very distant galaxies. Using previously obtained images taken at the Canada-France-Hawaii Telescope (CFHT) on Mauna Kea and images from the Hubble Space Telescope, it has then been verified that these galaxies are indeed not seen in the optical. In this way, six candidate high redshift galaxies were recognised whose light may have been emitted when the Universe was less than 700 million years old.

To confirm and obtain a more precise determination of the distance of one of these galaxies, the astronomers used again ISAAC on the VLT, but this time in its spectroscopic mode. After several months of careful analysis of the data, the astronomers are convinced to have detected a weak but clear spectral feature in the near-infrared domain. The astronomers have made a strong case that this feature is most certainly the Lyman-alpha emission line typical of these objects. This line, which occurs in the laboratory at a wavelength of 0.1216 micron, that is, in the ultraviolet, has been stretched to the near infrared at 1.34 micron, making Abell 1835 IR1916 the first galaxy known to have a redshift as large as 10.

The most distant galaxy known to date

This is the strongest case for a redshift in excess of the current spectroscopically confirmed record at z=6.6 and the first case of a double-digit redshift. Scaling the age of the Universe to a person’s lifetime (80 years, say), the previous confirmed record showed a four-year toddler. With the present observations, we have a picture of the child when he was two and a half years old.

From the images of this galaxy obtained in the various wavebands, the astronomers deduce that it is undergoing a period of intense star formation. But the amount of stars formed is estimated to be “only” 10 million times the mass of the sun, approximately ten thousand times smaller than the mass of our Galaxy, the Milky Way.

In other words, what the astronomers see is the first building block of the present-day large galaxies. This finding agrees well with our current understanding of the process of galaxy formation corresponding to a successive build-up of the large galaxies seen today through numerous mergers of “building blocks”, smaller and younger galaxies formed in the past.

It is these building blocks which may have provided the first light sources that lifted the fog over the Universe and put an end to the Dark Ages.

For Roser Pello, from the Observatoire Midi-Pyrenees (France) and co-leader of the team, “these observations show that under excellent sky conditions like those at ESO’s Paranal Observatory, and using strong gravitational lensing, direct observations of distant galaxies close to the Dark Ages are feasible with the best ground-based telescopes.”

The other co-leader of the team, Daniel Schaerer from the Geneva Observatory and University (Switzerland), is excited: “This discovery opens the way to future explorations of the first stars and galaxies in the early Universe.”

The information presented in this Press Release is based on a research article in the European research journal “Astronomy & Astrophysics” (A&A, volume 416, page L35; “ISAAC/VLT observations of a lensed galaxy at z=10.0” by Roser Pelló, Daniel Schaerer, Johan Richard, Jean-François Le Borgne, and Jean-Paul Kneib). It is available on the web at the EDP web site.