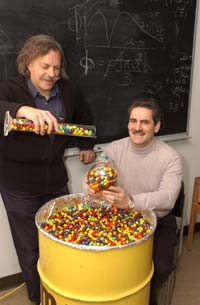 For most people, a regular lunch of M&M’s and coffee would lead to no good. For Princeton physicist Paul Chaikin and collaborators, it spurred fundamental insights into an age-old problem in mathematics and physics.

Chaikin and Princeton chemist Salvatore Torquato used the candies to investigate the physical and mathematical principles that come into play when particles are poured randomly into a vessel. While seemingly simple, the question of how particles pack together has been a persistent scientific problem for hundreds of years and has implications for fields such as the design of high-density ceramic materials for use in aerospace or other applications.

The researchers discovered that oblate spheroids, the shape of M&M’s Chocolate Candies®, pack surprisingly more densely than regular spheres when poured randomly and shaken. Extending the work with further experiments and sophisticated computer simulations, they found that a related shape, the ellipsoid, packs at random even more densely than the tightest possible, perfectly ordered arrangement of spheres. Previously, scientists did not know that randomly assembled particles could pack so densely.

“It is a startling and wonderful result,” said Sidney Nagel, a physicist at the University of Chicago. “One doesn’t normally stop to think about this. If you did, you might have guessed what would happen, but you’d have guessed wrongly.”

The researchers published their results in the Feb. 13 issue of Science magazine.

A surprising element of the results is that the small change from sphere to spheroid — one is just a squashed or stretched version of the other — produced a major change in the random packing density. When poured randomly, spheres occupy about 64 percent of the space in the container. M&M’s, by contrast, achieve a density of about 68 percent. In non-random packings — those that are laid out in regular repeating patterns — changing from sphere to spheroid has no significant effect on the packing density.

“We just stretched a sphere and suddenly things changed dramatically,” said Torquato. “I think that is remarkable.”

The reason for the effect, the researchers proposed, is that distorted particles act like little levers and pivot when they push into one another. When the particles turn, the cluster becomes unstable and has to pack tighter before becoming jammed. Perfect spheres do not tend to turn and would remain equally stable even if they did.

The study of particle packing dates to the 16th century when physicist and mathematician Johannes Kepler investigated ordered arrangements of spheres. It was not until 1998 that a mathematician proved that the densest possible arrangement of spheres fills 74.04 percent of the total space, as Kepler had predicted. The packing of randomly assembled particles is less well understood.

“There is still a tremendous intellectual puzzle in the way things like M&M’s pack together,” said Sir Sam Edwards, a physicist and authority on granular materials at Cambridge University. He said the new result is a “nice step forward” in clarifying the relation between particle shape, packing density and the methods used for pouring and shaking.

Chaikin and Torquato have had a longstanding interest in particle packing, but their work on spheroids stems from Chaikin’s longstanding interest in M&M’s. His students, poking fun at his affection for M&M-fueled lunches, sneaked a 55-gallon drum partly full of the candies into his office. Years later, after developing an apparatus to examine certain properties of sphere packings, he asked an undergraduate student, Evan Variano (now a graduate student at Cornell University), to measure the density of random-packed M&M’s. M&M’s happen to be almost perfect spheroids and are extremely uniform in size and shape, said Chaikin.

“I didn’t believe the results for some time and finally I just did it myself,” Chaikin said. “And, of course, Evan was completely right: They packed a lot better.” Another student, Ibrahim Cisse, meticulously counted the contact points between the candies by pouring paint through the container and looking for paint-free dots where candies touched.

The researchers then needed to assure themselves that the candies were not somehow assuming an ordered, crystalline arrangement in the center of the container. At the University Medical Center at Princeton, they did an MRI scan of the container and proved the M&M’s were oriented randomly.

To more fully understand the particle behavior, Torquato and his student Aleksandar Donev developed a computer simulation that allowed them to test any shape, from a flattened M&M-like shape to a sphere to an elongated cigar-like shape. The computer model yielded a further surprise when they stretched the M&M shape so it looked elliptical from the top as well as from the side (like an almond M&M). That shape, an ellipsoid, achieved a random packed density of nearly 74 percent (higher in subsequent studies).

“That blew us away,” said Chaikin. “Nobody had ever gotten random packings anywhere near crystalline packings, and this is above.”

The researchers plan to continue their investigations, which could ultimately prove important to any field involving granular materials, from molecules and cells to grain in a silo. Materials scientists, for example, make high-performance ceramics by fusing powders made of tiny particles. A more tightly packed powder with many contact points could yield a less porous ceramic, the researchers said.

The researchers also believe the work may shed light on an important class of substances that combine properties of liquids and solids. These materials, known as “glasses,” consist of randomly assembled molecules, as in liquids, but are hard. A glass is like a liquid whose molecules become “jammed” into solid state. “The precise connection between jamming and disorder is a deep and open question,” Torquato said.

“To me, it’s remarkable that you can take this simple system with common candies and probe one of the deepest problems in condensed matter physics,” Torquato added.

M&M is a registered trademark of Mars Inc. The company has no financial ties to the research, although it did donate 125 pounds of almond M&M’s to Chaikin. The work was supported by the National Science Foundation, the National Aeronautics and Space Administration and the Petroleum Research Fund.