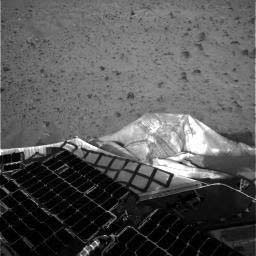 <b>First Look at Spirit at Landing Site</b> <br> <br>This is one of the first images beamed back to Earth shortly after the Mars Exploration Rover Spirit landed on the red planet. <br> <br>Image credit: NASA/JPL

A traveling robotic geologist from NASA has landed on Mars and returned stunning images of the area around its landing site in Gusev Crater.

“This is a big night for NASA,” said NASA Administrator Sean O’Keefe. “We’re back. I am very, very proud of this team, and we’re on Mars.”

Members of the mission’s flight team at NASA’s Jet Propulsion Laboratory, Pasadena, Calif., cheered and clapped when they learned that NASA’s Deep Space Network had received a post-landing signal from Spirit. The cheering resumed about three hours later when the rover transmitted its first images to Earth, relaying them through NASA’s Mars Odyssey orbiter.

“We’ve got many steps to go before this mission is over, but we’ve retired a lot of risk with this landing,” said JPL’s Pete Theisinger, project manager for the Mars Exploration Rover Project.

Deputy project manager for the rovers, JPL’s Richard Cook, said, “We’re certainly looking forward to Opportunity landing three weeks from now.” Opportunity is Spirit’s twin rover, headed for the opposite side of Mars.

Dr. Charles Elachi, JPL director, said, “To achieve this mission, we have assembled the best team of young women and men this country can put together. Essential work was done by other NASA centers and by our industrial and academic partners.

Spirit stopped rolling with its base petal down, though that favorable position could change as airbags deflate, said JPL’s Rob Manning, development manager for the rover’s descent through Mars’ atmosphere and landing on the surface.

NASA chose Spirit’s landing site, within Gusev Crater, based on evidence from Mars orbiters that this crater may have held a lake long ago. A long, deep valley, apparently carved by ancient flows of water, leads into Gusev. The crater itself is basin the size of Connecticut created by an asteroid or comet impact early in Mars’ history. Spirit’s task is to spend the next three months exploring for clues in rocks and soil about whether the past environment at this part of Mars was ever watery and suitable to sustain life.

The flight team expects to spend more than a week directing Spirit through a series of steps in unfolding, standing up and other preparations necessary before the rover rolls off of its lander platform to get its wheels onto the ground. Meanwhile, Spirit’s cameras and a mineral-identifying infrared instrument will begin examining the surrounding terrain. That information will help engineers and scientists decide which direction to send the rover first.

JPL, a division of the California Institute of Technology, manages the Mars Exploration Rover project for NASA’s Office of Space Science, Washington. Additional information about the project is available from JPL at: http://marsrovers.jpl.nasa.gov and from Cornell University, Ithaca, N.Y., at: http://athena.cornell.edu.