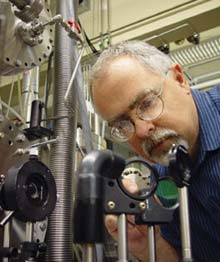 Using a method usually more suitable to billiards than atomic physics, researchers from Sandia National Laboratories and Columbia University have created extremely cold molecules that could be used as the first step in creating Bose-Einstein molecular condensates. The work is published in the Dec. 12 Science.

The serendipitous achievement came when researchers at Sandia’s Livermore, Calif., and Columbia University, studying collisional energy transfer between a beam of atoms intersecting a beam of molecules, noted that a certain number of collisions occurred — as they might between two billiard balls — at exactly the right velocity for molecules to become motionless.

A motionless molecule is a cold molecule, according to laws of physics.

The study had led to a new technique for cooling molecules to millikelvin (a thousandth of a degree Kelvin above absolute zero) temperatures — a first crucial step toward molecular ultra-coldness.

Though they were experts in neither cold molecules nor cold atoms, the researchers knew that atoms cooled to the nanokelvin (a billionth of a degree Kelvin) temperature range had been achieved several years ago with interesting basic-science results.

One product of the study of cold atoms is a new state of matter called a Bose-Einstein condensate. Certain atoms, bosons, can condense at a very low temperature and act as a single atom — a fact which some researchers claim may lead to as many new developments as the first laser, originally only a scientific curiousity.

“Our technique has promise to be developed into a first step in the cooling process needed for a molecular Bose-Einstein condensate,” says Sandia researcher and principal investigator Dave Chandler. The work is co-authored by Sandia post-doc Mike Elioff and James Valentini of Columbia University.

Very cold atoms and molecules may one day be used as individual yes/no switches (called Q-bits) in computers whose power our present-day imaginations are only beginning to grasp as well as precision gravity detectors that could perhaps locate underground caverns, says Chandler.

The main method used to achieve atomic ultra-cooling to the microkelvin temperature range — the same preliminary cooling range as the Sandia technique — makes use of laser beams that intersect at a point. An atom, possessing the appropriate absorption characteristics, passing through that point in effect stands still, like a kid in a dodge-ball game struck from all sides with balls. Transfixed by pressure from the beams, the atom becomes almost motionless.

The problem in cooling molecules by the laser method is that while some atoms possess characteristics that can be harmonically matched by a laser frequency, like the same note played by two pianos, molecular energy frequencies are more complex. This complexity makes them unsuitable for this type of laser cooling.

“Our atomic/molecular beam intersection method is inefficient, it’s true,” says Chandler. “We only manage to cool one molecule in a million. But — inefficient or efficient — we generate cold molecules. With some improvements, we hope to be able to make substantial numbers of cold molecules.”

Molecules are cheap, he says, so getting one in a million (1 in 106) cooling collisions out of the 1015 total collisions per second the molecules undergo in the beams doesn’t bother him.

This first-step method — the only one to rely solely on the masses of the atoms and molecules involved — could be useful in slowing down the speed of a variety of molecules sufficiently such that magnetic or electrical traps can be used to cool molecules further. Without prior slow-down, molecules would escape these relatively weak traps, like molecules of water rising from the surface of the hot coffee. Cold coffee evaporates fewer molecules.

Instruments in Chandler’s lab, working at their resolution limit, show selected molecules in the intersecting beams slowing from 600 meters/sec to 15 meters/sec. The group’s calculations indicate the speed to be on the order of 4 meters/sec. This average speed for the molecules is equivalent to a temperature on the tens of milliKelvin level — that is, several thousandths of a degree above the universe’s absolute zero of -273 Celsius.

The last ninety nine yards, so to speak, are the hardest: Bose-Einstein condensates exist in the nanokelvin range, six orders of magnitude colder.

The basic-science work, funded by DOE’s Basic Energy Sciences, focuses on understanding how energy flows between molecules for a better understanding of heat transfer.