Home / Physics and Astronomy / Biggest Star in Our Galaxy Sits within a Rugby-Ball Shaped Cocoon
27.11.2003 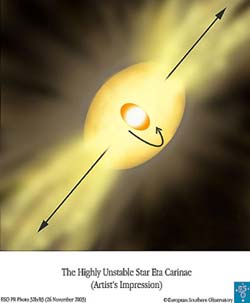 Artist’s impression of the unstable star Eta Carinae; based on the new knowledge gained from measurements with the VLT Interferometer (VLTI). The inner elongated shape is the central star; as it would be visible in the absence of the stellar wind. The larger rugby-ball shape indicates the region where the strong stellar wind becomes opaque to VINCI. The longer axis of the system is found to coincide with the direction of the bipolar outflow; both on large and small scales.

VLT Interferometer Gives Insight Into the Shape of Eta Carinae

Ever since 1841, when the until then inconspicuous southern star Eta Carinae underwent a spectacular outburst, astronomers have wondered what exactly is going on in this unstable giant star. However, due to its considerable distance – 7,500 light-years – details of the star itself were beyond observation.

This star is known to be surrounded by the Homunculus Nebula, two mushroom-shaped clouds ejected by the star, each of which is hundreds of times larger than our solar system.

Now, for the first time, infrared interferometry with the VINCI instrument on ESO’s Very Large Telescope Interferometer (VLTI) enabled an international team of astronomers [1] to zoom-in on the inner part of its stellar wind. For Roy van Boekel, leader of the team, these results indicate that “the wind of Eta Carinae turns out to be extremely elongated and the star itself is highly unstable because of its fast rotation.”

A monster in the southern sky

Eta Carinae, the most luminous star known in our Galaxy, is by all standards a real monster: it is 100 times more massive than our Sun and 5 million times as luminous. This star has now entered the final stage of its life and is highly unstable. It undergoes giant outbursts from time to time; one of the most recent happened in 1841 and created the beautiful bipolar nebula known as the Homunculus Nebula (see ESO PR Photo 32a/03). At that time, and despite the comparatively large distance – 7,500 light-years – Eta Carinae briefly became the second brightest star in the night sky, surpassed only by Sirius.

Eta Carinae is so big that, if placed in our solar system, it would extend beyond the orbit of Jupiter. This large size, though, is somewhat arbitrary. Its outer layers are continually being blown into space by radiation pressure – the impact of photons on atoms of gas. Many stars, including our Sun, lose mass because of such “stellar winds”, but in the case of Eta Carinae, the resulting mass loss is enormous (about 500 Earth-masses a year) and it is difficult to define the border between the outer layers of the star and the surrounding stellar wind region.

Now, VINCI and NAOS-CONICA, two infrared-sensitive instuments on the ESO’s Very Large Telescope (VLT) at the Paranal Observatory (Chile), have probed the shape of the stellar wind region for the first time. Looking down into the stellar wind as far as possible, the astronomers could infer some of the structure of this enigmatic object.

The astronomer team [1] first used the NAOS-CONICA adaptive optics camera [2], attached to the 8.2-m VLT YEPUN telescope, to image the hazy surroundings of Eta Carinae, with a spatial resolution comparable to the size of the solar system, cf. PR Photo 32a/03.

This image shows that the central region of the Homunculus nebula is dominated by an object that is seen as a point-like light source with many luminous “blobs” in the immediate vicinity.

In order to obtain an even sharper view, the astronomers then turned to interferometry. This technique combines two or more telescopes to achieve an angular resolution [3] equal to that of a telescope as large as the separation of the individual telescopes (cf. ESO PR 06/01 and ESO PR 23/01).

For the study of the rather bright star Eta Carinae the full power of the 8.2-m VLT telescopes is not required. The astronomers thus used VINCI, the VLT INterferometer Commissioning Instrument [4], together with two 35-cm siderostat test telescopes that served to obtain “First Light” with the VLT Interferometer in March 2001 (see ESO PR 06/01).

The siderostats were placed at selected positions on the VLT Observing Platform at the top of Paranal to provide different configurations and a maximum baseline of 62 meters. During several nights, the two small telescopes were pointed towards Eta Carinae and the two light beams were directed towards a common focus in the VINCI test instrument in the centrally located VLT Interferometric Laboratory. It was then possible to measure the angular size of the star (as seen in the sky) in different directions.

Pushing the spatial resolution of this configuration to the limit, the astronomers succeeded in resolving the shape of the outer layer of Eta Carinae. They were able to provide spatial information on a scale of 0.005 arcsec, that is about 11 AU (1650 million km) at the distance of Eta Carinae, corresponding to the full size of the orbit of Jupiter.

Scaled down to terrestial dimensions, this achievement compares to making the distinction between an egg and a billiard ball at a distance of 2,000 kilometers.

A most unusual shape

The VLTI observations brought the astronomers a surprise. They indicate that the wind around Eta Carinae is amazingly elongated: one axis is one-and-a-half times longer than the other! Moreover, the longer axis is found to be aligned with the direction in which the much larger mushroom-shaped clouds (seen on less sharp images) were ejected.

Spanning a scale from 10 to 20-30,000 AU, the star itself and the Homunculus Nebula are thus closely aligned in space.

VINCI was able to detect the boundary where the stellar wind from Eta Carinae becomes so dense that it is no longer transparent. Apparently, this stellar wind is much stronger in the direction of the long axis than of the short axis.

According to mainstream theories, stars lose most mass around their equator. This is because this is where the stellar wind gets “lifting” assistance from the centrifugal force caused by the star’s rotation. However, if this were so in the case of Eta Carinae, the axis of rotation (through the star’s poles) would then be perpendicular to both mushroom-shaped clouds. But it is virtually impossible that the mushroom clouds are positioned like spokes in a wheel, relative to the rotating star. The matter ejected in 1841 would then have been stretched into a ring or torus.

For Roy van Boekel, “the current overall picture only makes sense if the stellar wind of Eta Carinae is elongated in the direction of its poles. This is a surprising reversal of the usual situation, where stars (and planets) are flattened at the poles due to the centrifugal force.

Such an exotic shape for Eta Carinae-type stars was predicted by theoreticians. The main assumption is that the star itself, which is located deep inside its stellar wind, is flattened at the poles for the usual reason. However, as the polar areas of this central zone are then closer to the centre where nuclear fusion processes take place, they will be hotter. Consequently, the radiation pressure in the polar directions will be higher and the outer layers above the polar regions of the central zone will get more “puffed up” than the outer layers at the equator.

Assuming this model is correct, the rotation of Eta Carinae can be calculated. It turns out that it should spin at over 90 percent of the maximum speed possible (before break-up).

Eta Carinae has experienced large outbursts other than the one in 1841, most recently around 1890. Whether another outburst will happen again in the near future is unknown, but it is certain that this unstable giant star will not settle down.

At the present, it is losing so much mass so rapidly that nothing will be left of it after less than 100,000 years. More likely, though, Eta Carinae will destroy itself long before that in a supernova blast that could possibly become visible in the daytime sky with the naked eye. This may happen “soon” on the astronomical time-scale, perhaps already within the next 10-20,000 years.

[2]: The Nasmyth Adaptive Optics System (NAOS) has been developed by a French Consortium including the Office National d’Etudes et de Recherches AÈrospatiales (ONERA), the Laboratoire d’Astrophysique de Grenoble (LAOG) and Observatoire de Paris (DESPA and DASGAL), in collaboration with ESO. The CONICA Near-Infrared CAmera has been developed by the Max-Planck-Institut fur Astronomie (MPIA, Heidelberg) and the Max-Planck-Institut fur Extraterrestrische Physik (MPE, Garching), with an extensive ESO collaboration. See ESO PR 25/01.

[4]: The VINCI instrument was built under ESO contract at the Observatoire de Paris (France) and the camera in this instrument was delivered by the Max-Planck-Institute fur Extraterrestrische Physik (Garching, Germany). The IR detector and the IRACE detector electronics were supplied by ESO.

Phonon imaging in 3D with a fiber probe