A new Cornell &#146;nanoguitar,&#146; played by a laser, offers promise of applications in electronics and sensing 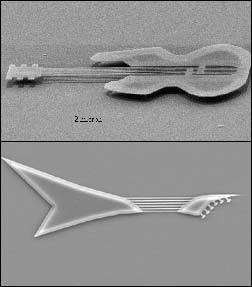 The original nanoguitar (top) was made to resemble a Fender Stratocaster. The new, "playable" version is modeled on the Gibson Flying V. Both were made by electron beam lithography, which can create far smaller shapes than earlier methods, at the Cornell Nanoscale Facility. Craigfhead GroupCopyright © Cornell University

Now, by “playing” a new, streamlined nanoguitar, Cornell physicists are demonstrating how such devices could substitute for electronic circuit components to make circuits smaller, cheaper and more energy-efficient.

Lidija Sekaric, who built the new, playable nanoguitar while an Applied Physics graduate student at Cornell, described the project, along with other materials and device research in nanoelectromechanical systems (NEMS), at the 50th International Symposium and Exhibition of the American Vacuum Society, Nov. 2 to 7 in Baltimore,. At the same meeting Harold Craighead, professor of applied and engineering physics at Cornell, presented a plenary talk reviewing the uses of NEMS in biology. Sekaric worked in the Craighead Research Group at Cornell, part of the Cornell Center for Materials Research study of NEMS systems.

NEMS usually refers to devices about two orders of magnitude smaller than MEMS (microelectromechanical systems). Craighead prefers to define NEMS as devices in which the small size is essential for the job, such as those that respond to very small forces or biosensors so small that they can measure the mass of a single bacterium.

Sekaric, now a researcher at IBM’s Watson Research Center in Yorktown Heights, N.Y., worked with Cornell graduate student Keith Aubin and undergraduate researcher Jingqing Huang on the new nanoguitar, which is about five times larger than the original, but still so small that its shape can only be seen in a microscope. Its strings are really silicon bars, 150 by 200 nanometers in cross-section and ranging from 6 to 12 micrometers in length (a micrometer is one-millionth of a meter; a nanometer is a billionth of a meter, the length of three silicon atoms in a row). The strings vibrate at frequencies 17 octaves higher than those of a real guitar, or about 130,000 times higher.

The researchers recently observed that light from a laser could cause properly designed small devices to oscillate, and this effect underlies the nanoguitar design. The nanoguitar is played by hitting the strings with a focused laser beam. When the strings vibrate they create interference patterns in the light reflected back, which can be detected and electronically converted down to audible notes. The device can play only simple tones, although chords can be played by activating more than one string at a time. The pitches of the strings are determined by their length, not by their tension as in a normal guitar, but the group has “tuned” the resonances in similar devices by applying a DC voltage.

“The generations of researchers to come can aim to play more complex pieces,” says Sekaric. “This goal would indeed improve the science and technology of NEMS by aiming for integrated driving and detection schemes as well as a wide range of frequencies produced from a small set of vibrating elements.”

Most of the devices the group studies don’t resemble guitars, but the study of resonances often leads to musical analogies, and the natural designs of the small resonant systems often leads to shapes that look like harps, xylophones or drums. The guitar shape was, Craighead says, “an artistic expression by the engineering students.” Sekaric notes that “a nanoguitar, as something close to almost everybody’s understanding and experience, can also be used as a good educational tool about the field of nanotechnology, which indeed needs much public education and outreach.”

The ability to make tiny things vibrate at very high frequencies offers many potential applications in electronics. From guitar strings on down, the frequency at which an object vibrates depends on its mass and dimensions. Nanoscale objects can be made to vibrate at radio frequencies (up to hundreds of megaHertz) and so can substitute for other components in electronic circuits. Cell phones and other wireless devices, for example, usually use the oscillations of a quartz crystal to generate the carrier wave on which they transmit or to tune in an incoming signal. A tiny vibrating nanorod might do the same job in vastly less space, while drawing only milliwatts of power.

Research by the Cornell NEMS group has shown that these oscillations can be tuned to a very narrow range of frequencies — a property referred to in electronics as “high Q” — which makes them useful as filters to separate signals of different frequencies. They also may be used to detect vibrations to help locate objects or detect faint sounds that could predict the failure of machinery or structures.

As the nanoguitar shows, NEMS can be used to modulate light, meaning they might be used in fiber-optic communications systems. Such systems currently require a laser at each end for two-way communication. Instead, Craighead suggests that a powerful laser at one end could send a beam that would be modulated and reflected back by a far less expensive NEMS device. This could make it more economical to run fiber-optic connections to private homes or to desktop computers in an office.

Current research at Cornell, Craighead says, still focuses on understanding what materials work best for making NEMS, how such small devices work and what they can do, gathering understanding that can be used in building future applications. .