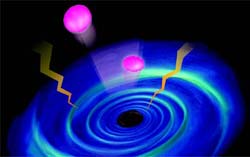 The whirling accretion disk surrounding the supermassive black hole (center) at the core of the Milky Way Galaxy. As hot gas falls into the black hole, the energy is converted into radiation which is emitted in sudden bursts. The infrared emissions detected recently may accompany blobs of gas ejected from the disk (purple) or come from sparks that occur randomly in the accreting gas (yellow). (Courtesy of Nature, based on image created by Michael P. Owen) <br>

Razor-sharp optics on ground-based telescopes now allows astronomers to peer at events occurring near the very edge of our galaxy’s central black hole, providing new clues about the massive but invisible object at the core of the Milky Way.

In a paper in this week’s issue of Nature, a team led by University of California, Berkeley, physicist Reinhard Genzel, who also directs the Max-Planck Institute for Extraterrestrial Physics (MPE) in Garching, Germany, reports the detection of powerful infrared flares from a region just outside the supermassive black hole.

If the black hole, which has a mass about 3.6 million times that of the sun, were at the center of our solar system, the flares would have come from somewhere within the orbit of Earth.

The observed signals, rapidly flickering on a scale of minutes, probably came from hot gas falling into the black hole, just before the gas disappeared below the “event horizon” – the point of no return for a black hole from which even light cannot escape.

The new observations strongly suggest that the black hole at the galaxy’s core rotates rapidly, the team concluded.

“This is a major breakthrough,” Genzel said. “We know from theory that a black hole can only have mass, spin and electrical charge. Last year, we were able to unambiguously prove the existence and determine the mass of the galactic center black hole.

“If our assumption is correct that the periodicity (of the flares) is the fundamental orbital time of the accreting gas, we now have also measured its spin for the first time. And that turns out to be about half of the maximum spin that general relativity allows.”

The observed flares repeated about every 17 minutes, implying that the central black hole rotates once about every 30 seconds, said Eliot Quataert, a UC Berkeley assistant professor of astronomy involved in theoretical modeling of the black hole accretion disk. For comparison, the sun, which is one-tenth the diameter of the black hole and several million times less massive, rotates about once every month, Quataert noted.

Scientists have never before been able to study phenomena in the immediate neighborhood of a black hole in such a detail. The new result is based on observations obtained with the NACO Adaptive Optics instrument on the 8.2-meter KUEYEN telescope of the European Southern Observatory’s Very Large Telescope (VLT) in Chile’s Atacama desert.

A separate team from UCLA reported last month in Astrophysical Journal that it had seen similar variability in infrared emissions from the galaxy’s central black hole using the adaptive optics on the W. M. Keck II telescope in Hawaii. Adaptive optics allows telescopes to overcome the image distortions in the optical/infrared wavelength region caused by the turbulent terrestrial atmosphere. By flexing a deformable mirror, adaptive optics on the VLT produces an image about 10 times sharper in the near-infrared than with conventional observations, and about four times sharper than the Hubble Space Telescope working at this wavelength.

“These observations, reflecting similar patterns seen earlier in X-rays, open a new window on this enigmatic source,” said Ramesh Narayan of the Harvard-Smithsonian Center for Astrophysics, in a commentary that also appears in this week’s Nature.

“We had been looking for infrared emission from that black hole for more than a decade,” said team member Andreas Eckart of Cologne University in Germany. “We were certain that the black hole must be accreting matter from time to time. As this matter falls towards the surface of the black hole, it gets hotter and hotter and starts emitting infrared radiation.”

The near-infrared emissions were observed on May 9, 2003, coming from a bright radio source at the galactic core known as Sagittarius A*, or SgrA*.

“Our data give us unprecedented information about what happens just outside the event horizon and let us test the predictions of general relativity,” explained Daniel Rouan, a team member from Paris-Meudon Observatory in France. “The most striking result is an apparent 17-minute periodicity in the light curves of two of the detected flares. If this periodicity is caused by the motion of gas orbiting the black hole, the inevitable conclusion is that the black hole must be rotating rapidly.”

The rapid variability seen in the infrared data indicates that the region around the event horizon must have chaotic properties very much like those seen in thunderstorms or solar flares, the researchers said. In fact, wrote Narayan in his Nature commentary, the flares could be created by the same magnetic phenomenon, magnetic reconnection, that produces bright flares on the sun.

“The beauty of having a flaring source such as Sgr A* is that each flare provides a new and independent view of the underlying physical processes,” he wrote. “So by collecting and studying data on many flares, we may learn much more than from a steady source.”

Genzel’s coauthors, in addition to Eckart and Rouan, are Rainer Schödel, T. Ott and B. Aschenbach of the Max-Planck Institute, T. Alexander of the Weizmann Institute of Science in Israel, and F. Lacombe of the Observatoire de Paris.