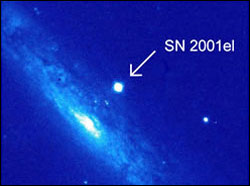 Supernova 2001el appeared in September, 2001, in galaxy NGC 1448 in the southern constellation Horologium (the Clock).

An international team of astronomers [2] has performed new and very detailed observations of a supernova in a distant galaxy with the ESO Very Large Telescope (VLT) at the Paranal Observatory (Chile). They show for the first time that a particular type of supernova, caused by the explosion of a “white dwarf”, a dense star with a mass around that of the Sun, is asymmetric during the initial phases of expansion.

The significance of this observation is much larger than may seem at a first glance. This particular kind of supernova, designated “Type Ia”, plays a very important role in the current attempts to map the Universe. It has for long been assumed that Type Ia supernovae all have the same intrinsic brightness, earning them a nickname as “standard candles”.

If so, differences in the observed brightness between individual supernovae of this type simply reflect their different distances. This, and the fact that the peak brightness of these supernovae rivals that of their parent galaxy, has allowed to measure distances of even very remote galaxies. Some apparent discrepancies that were recently found have led to the discovery of cosmic acceleration.

However, this first clearcut observation of explosion asymmetry in a Type Ia supernova means that the exact brightness of such an object will depend on the angle from which it is seen. Since this angle is unknown for any particular supernova, this obviously introduces an amount of uncertainty into this kind of basic distance measurements in the Universe which must be taken into account in the future.

Fortunately, the VLT data also show that if you wait a little – which in observational terms makes it possible to look deeper into the expanding fireball – then it becomes more spherical. Distance determinations of supernovae that are performed at this later stage will therefore be more accurate.

During Type Ia supernova events, remnants of stars with an initial mass of up to a few times that of the Sun (so-called “white dwarf stars”) explode, leaving nothing behind but a rapidly expanding cloud of “stardust”.

Type Ia supernovae are apparently quite similar to one another. This provides them a very useful role as “standard candles” that can be used to measure cosmic distances. Their peak brightness rivals that of their parent galaxy, hence qualifying them as prime cosmic yardsticks.

Astronomers have exploited this fortunate circumstance to study the expansion history of our Universe. They recently arrived at the fundamental conclusion that the Universe is expanding at an accelerating rate, cf. ESO PR 21/98, December 1998 (see also the Supernova Acceleration Probe web page).

The explosion of a white dwarf star

In the most widely accepted models of Type Ia supernovae the pre-explosion white dwarf star orbits a solar-like companion star, completing a revolution every few hours. Due to the close interaction, the companion star continuously loses mass, part of which is picked up (in astronomical terminology: “accreted”) by the white dwarf.

A white dwarf represents the penultimate stage of a solar-type star. The nuclear reactor in its core has run out of fuel a long time ago and is now inactive. However, at some point the mounting weight of the accumulating material will have increased the pressure inside the white dwarf so much that the nuclear ashes in there will ignite and start burning into even heavier elements. This process very quickly becomes uncontrolled and the entire star is blown to pieces in a dramatic event. An extremely hot fireball is seen that often outshines the host galaxy.

The shape of the explosion

Although all supernovae of Type Ia have quite similar properties, it has never been clear until now how similar such an event would appear to observers who view it from different directions. All eggs look similar and indistinguishable from each other when viewed from the same angle, but the side view (oval) is obviously different from the end view (round).

And indeed, if Type Ia supernova explosions were asymmetric, they would shine with different brightness in different directions. Observations of different supernovae – seen under different angles – could therefore not be directly compared.

Not knowing these angles, however, the astronomers would then infer incorrect distances and the precision of this fundamental method for gauging the structure of the Universe would be in question.

Polarimetry to the rescue

A simple calculation shows that even to the eagle eyes of the VLT Interferometer (VLTI), all supernovae at cosmological distances will appear as unresolved points of light; they are simply too far. But there is another way to determine the angle at which a particular supernova is viewed: polarimetry is the name of the trick!

Polarimetry works as follows: light is composed of electromagnetic waves (or photons) which oscillate in certain directions (planes). Reflection or scattering of light favours certain orientations of the electric and magnetic fields over others. This is why polarising sunglasses can filter out the glint of sunlight reflecting off a pond.

When light scatters through the expanding debris of a supernova, it retains information about the orientation of the scattering layers. If the supernova is spherically symmetric, all orientations will be present equally and will average out, so there will be no net polarisation. If, however, the gas shell is not round, a slight net polarisation will be imprinted on the light.

“Even for quite noticable asymmetries, however, the polarisation is very small and barely exceeds the level of one percent”, says Dietrich Baade, ESO astronomer and a member of the team that performed the observations. “Measuring them requires an instrument that is very sensitive and very stable. ”

The measurement in faint and distant light sources of differences at a level of less than one percent is a considerable observational challenge. “However, the ESO Very Large Telescope (VLT) offers the precision, the light collecting power, as well as the specialized instrumentation required for such a demanding polarimetric observation”, explains Dietrich Baade. “But this project would not have been possible without the VLT being operated in service mode. It is indeed impossible to predict when a supernova will explode and we need to be ready all the time. Only service mode allows observations at short notice. Some years ago, it was a farsighted and courageous decision by ESO’s directorate to put so much emphasis on Service Mode. And it was the team of competent and devoted ESO astronomers on Paranal who made this concept a practical success”, he adds.

The astronomers [1] used the VLT multi-mode FORS1 instrument to observe SN 2001el, a Type Ia supernova that was discovered in September 2001 in the galaxy NGC 1448, at a distance of 60 million light-years.

Observations obtained about a week before this supernova reached maximum brightness around October 2 revealed polarisation at levels of 0,2 – 0,3%. Near maximum light and up to two weeks thereafter, the polarisation was still measurable. Six weeks after maximum, the polarisation had dropped below detectability.

This is the first time ever that a normal Type Ia supernova has been found to exhibit such clear-cut evidence of asymmetry.

Looking deeper into the supernova

Immediately following the supernova explosion, most of the expelled matter moves at velocities around 10,000 km/sec. During this expansion, the outermost layers become progressively more transparent. With time one can thus look deeper and deeper into the supernova.

The polarisation measured in SN 2001el therefore provides evidence that the outermost parts of the supernova (which are first seen) are significantly asymmetric. Later, when the VLT observations “penetrate” deeper towards the heart of the supernova, the explosion geometry is increasingly more symmetric.

If modeled in terms of a flattened spheroidal shape, the measured polarisation in SN 2001el implies a minor-to-major axis ratio of around 0.9 before maximum brightness is reached and a spherically symmetric geometry from about one week after this maximum and onward.

One of the key parameters on which Type Ia distance estimates are based is the optical brightness at maximum. The measured asphericity at this moment would introduce an absolute brightness uncertainty (dispersion) of about 10% if no correction were made for the viewing angle (which is not known).

While Type Ia supernovae are by far the best standard candles for measuring cosmological distances, and hence for investigating the so-called dark energy, a small measurement uncertainty persists.

“The asymmetry we have measured in SN 2001el is large enough to explain a large part of this intrinsic uncertainty”, says Lifan Wang, the leader of the team. “If all Type Ia supernovae are like this, it would account for a lot of the dispersion in brightness measurements. They may be even more uniform than we thought.”

Reducing the dispersion in brightness measurements could of course also be attained by increasing significantly the number of supernovae we observe, but given that these measurements demand the largest and most expensive telescopes in the world, like the VLT, this is not the most efficient method.

Thus, if the brightness measured a week or two after maximum was used instead, the sphericity would then have been restored and there would be no systematic errors from the unknown viewing angle. By this slight change in observational procedure, Type Ia supernovae could become even more reliable cosmic yardsticks.

The present detection of polarised spectral features strongly suggests that, to understand the underlying physics, the theoretical modelling of Type Ia supernovae events will have to be done in all three dimensions with more accuracy than is presently done. In fact, the available, highly complex hydrodynamic calculations have so far not been able to reproduce the structures exposed by SN 2001el.

The results presented in this press release have been been described in a research paper in “Astrophysical Journal” (“Spectropolarimetry of SN 2001el in NGC 1448: Asphericity of a Normal Type Ia Supernova” by Lifan Wang and co-authors, Volume 591, p. 1110).