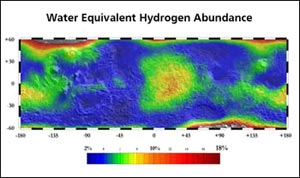 “Breathtaking” new maps of likely sites of water on Mars showcase their association with geologic features such as Vallis Marineris, the largest canyon in the solar system.

The maps detail the distribution of water-equivalent hydrogen as revealed by Los Alamos National Laboratory-developed instruments aboard NASA’s Mars Odyssey spacecraft. In an upcoming talk at the Sixth International Conference on Mars at the California Institute of Technology, in Pasadena, Los Alamos space scientist Bill Feldman and coworkers will offer current estimates of the total amount of water stored near the Martian surface. His presentation will be at 1:20 p.m., Friday, July 25.

For more than a year, Los Alamos’ neutron spectrometer has been carefully mapping the hydrogen content of the planet’s surface by measuring changes in neutrons given off by soil, an indicator of hydrogen likely in the form of water-ice. The new color maps are available at http://www.lanl.gov/worldview/news/photos/mars.shtml.

“The new pictures are just breathtaking, the water-equivalent hydrogen follows the geographic features beautifully,” said Feldman. “There’s a lane of hydrogen-rich material following the western slopes of the biggest volcanoes in the solar system, a maximum reading sits right on Elysium mons, and another maximum is in the deepest canyon in the solar system.”

The new maps combine images from the Mars Orbiter Laser Altimeter (MOLA) on the Mars Global Surveyor with Mars Odyssey spectrometer data through more than half a Martian year of 687 Earth days. From about 55 degrees latitude to the poles, Mars boasts extensive deposits of soils that are rich in water-ice, bearing an average of 50 percent water by mass. In other words, Feldman said, a typical pound of soil scooped up in those polar regions would yield an average of half a pound of water if it were heated in an oven.

The tell-tale traces of hydrogen, and therefore the presence of hydrated minerals, also are found in lower concentrations closer to Mars’ equator, ranging from two to 10 percent water by mass. Surprisingly, two large areas, one within Arabia Terra, the 1,900-mile-wide Martian desert, and another on the opposite side of the planet, show indications of relatively large concentrations of sub-surface hydrogen.

Scientists are attracted to two possible theories of how all that water got into the Martian soils and rocks.

The vast water icecaps at the poles may be the source. The thickness of the icecaps themselves may be enough to bottle up geothermal heat from below, increasing the temperature at the bottom and melting the bottom layer of the icecaps, which then could feed a global water table.

On the other hand, there is evidence that about a million years or so ago, Mars’ axis was tilted about 35 degrees, which might have caused the polar icecaps to evaporate and briefly create enough water in the atmosphere to make ice stable planet-wide. The resultant thick layer of frost may then have combined chemically with hydrogen-hungry soils and rocks.

“We’re not ready yet to precisely describe the abundance and stratigraphy of these deposits, but the neutron spectrometer shows water ice close to the surface in many locations, and buried elsewhere beneath several inches of dry soils,” Feldman said. “Some theories predict these deposits may extend a half mile or more beneath the surface; if so, their total water content may be sufficient to account for the missing water budget of Mars.”

In fact, a team of Los Alamos scientists has begun a research project to interpret the Mars Odyssey data and their ramifications for the history of Mars’ climate. The project is funded through the Laboratory Directed Research and Development program – which funds innovative science with a portion of the Laboratory’s operating budget – and seeks to develop a global Martian hydrology model, using vast amounts of remote sensing data, topography maps and experimental results on water loading of minerals.

The neutron spectrometer looks for neutrons generated when cosmic rays slam into the nuclei of atoms on the planet’s surface, ejecting neutrons skyward with enough energy to reach the Odyssey spacecraft 250 miles above the surface.

Elements create their own unique distribution of neutron energy – fast, thermal or epithermal – and these neutron flux signatures are shaped by the elements that make up the soil and how they are distributed. Thermal neutrons are low-energy neutrons in thermal contact with the soil; epithermal neutrons are intermediate, scattering down in energy after bouncing off soil material; and fast neutrons are the highest-energy neutrons produced in the interaction between high-energy galactic cosmic rays and the soil.

By looking for a decrease in epithermal neutron flux, researchers can locate hydrogen. Hydrogen in the soil efficiently absorbs the energy from neutrons, reducing their flux in the surface and also the flux that escapes the surface to space where it is detected by the spectrometer. Since hydrogen is likely in the form of water-ice at high latitudes, the spectrometer can measure directly, a yard or so deep into the Martian surface, the amount of ice and how it changes with the seasons.

The Los Alamos expertise in neutron spectroscopy stems from longtime nuclear nonproliferation work at the Laboratory, funded by the U.S. Department of Energy’s National Nuclear Security Administration. The ability to measure and detect signatures of nuclear materials is a vital component of the Laboratory’s mission to reduce the threats from weapons of mass destruction.

Mars Odyssey was launched from Cape Canaveral Air Force Station in April 2001 and arrived in Martian orbit in late October 2001. During the rest of the spacecraft’s 917-day science mission, Los Alamos’ neutron spectrometer will continue to improve the hydrogen map and solve more Martian moisture mysteries.

Jet Propulsion Laboratory, a division of the California Institute of Technology in Pasadena, manages the Mars Odyssey mission for NASA’s Office of Space Science in Washington, D.C. Investigators at Arizona State University in Tempe, the University of Arizona in Tucson and NASA’s Johnson Space Center, Houston, operate the science instruments. Additional science partners are located at the Russian Aviation and Space Agency and at Los Alamos National Laboratories, New Mexico. Lockheed Martin Astronautics, Denver, the prime contractor for the project, developed and built the orbiter. Mission operations are conducted jointly from Lockheed Martin and from JPL.