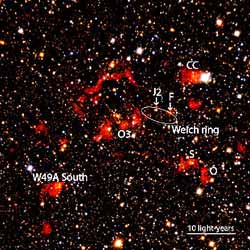 A composite near-infrared colour image from NTT/SofI. It covers a sky area of 5 x 5 arcmin2 and the red, green and blue colours correspond to the Ks- (wavelength 2.2 µm), H- (1.65 µm) and J-band (1.2 µm), respectively. North is up and East is to the left. The labels identify known radio sources. The main cluster is seen north-east of the region labelled "O3". The colour of a star in this image is mostly a measure of the amount of dust absorption towards this star. Hence, all blue stars in this image are located in front of the star-forming region.

Peering into a giant molecular cloud in the Milky Way galaxy – known as W49 – astronomers from the European Southern Observatory (ESO) have discovered a whole new population of very massive newborn stars. This research is being presented today at the International Astronomical Union’s 25th General Assembly held in Sydney, Australia, by ESO-scientist João Alves.

With the help of infrared images obtained during a period of excellent observing conditions with the ESO 3.5-m New Technology Telescope (NTT) at the La Silla Observatory (Chile), the astronomers looked deep into this molecular cloud and discovered four massive stellar clusters, with hot and energetic stars as massive as 120 solar masses. The exceedingly strong radiation from the stars in the largest of these clusters is “powering” a 20 light-year diameter region of mostly ionized hydrogen gas (a “giant HII region”).

W49 is one of the most energetic regions of star formation in the Milky Way. With the present discovery, the true sources of the enormous energy have now been revealed for the first time, finally bringing to an end some decades of astronomical speculations and hypotheses.

Stars form predominantly inside Giant Molecular Clouds which populate our Galaxy, the Milky Way. One of the most prominent of these is W49, which has a mass of a million solar masses. It is located some 37,000 light-years away and is the most luminous star-forming region known in our home galaxy: its luminosity is several million times the luminosity of our Sun. A smaller region within this cloud is denoted W49A – this is one of the strongest radio-emitting areas known in the Galaxy.

Massive stars are excessive in all ways. Compared to their smaller and ligther brethren, they form at an Olympic speed and have a frantic and relatively short life. Formation sites of massive stars are quite rare and, accordingly, most are many thousands of light-years away. For that reason alone, it is in general much more difficult to observe details of massive-star formation.

Moreover, as massive stars are generally formed in the main plane of the Galaxy, in the disc where a lot of dust is present, the first stages of such stars are normally hidden behind very thick curtains. In the case of W49A, less than one millionth of the visible light emitted by a star in this region will find its way through the heavy intervening layers of galactic dust and reach the telescopes on Earth.

And finally, because massive stars just formed are still very deeply embedded in their natal clouds, they are anyway not detectable at optical wavelengths. Observations of this early phase of the lives of heavy stars must therefore be done at longer wavelengths (where the dust is more transparent), but even so, such natal dusty clouds still absorb a large proportion of the light emitted by the young stars.

Because of this observational obstacle, nobody had ever looked deep enough into the central most dense regions of the W49A molecular cloud – and nobody really knew what was in there. That is, until João Alves and his colleague, Nicole Homeier decided to obtain “deep” and penetrating observations of this mysterious area with the SofI near-infrared camera on the 3.5-m New Technology Telescope (NTT) at the ESO La Silla Observatory (Chile).

A series of infrared images was secured during a spell of good weather and very good atmospheric conditions (seeing about 0.5 arcsec). They clearly show the presence of a cluster of stars at the centre of a region of ionized hydrogen gas (an “HII-region”) measuring 20 light-years across. In addition, three other smaller clusters of stars were detected in the image.

Altogether, the ESO astronomers were able to identify more than one hundred heavy-weight stars inside W49A, with masses greater than 15 to 20 times the mass of our Sun. Among these, about thirty are located within the 20 light-year central region and about ten in each of the three other clusters.

The discovery of these hot and massive stars solves a long-standing problem concerning W49A: the exceptional brightness (in astronomical terminology: “luminosity”) of the entire region requires the energetic output from about one hundred massive stars, and nobody had ever seen them. But here they are on the deep and sharp SofI images!

The presence of such a large number of very massive stars spread over the entire region suggests that star formation in the various regions of W49A must have happened rather simultaneously from different seeds and not, as some theories propose, by a “domino-type” chain effect where stellar winds of fast particles and the emitted radiation of newly formed massive stars trigger another burst of star formation in the immediate neighbourhood.

The present research results also imply that star formation in W49A began earlier and extends over a larger area than previously thought.

João Alves is sure that this news will be received with interest by his colleagues: “W49A has long been known to radio astronomers as one of the most powerful star-forming region in the Galaxy with 30 or so massive baby-stars of the O-type, very deeply embedded in their parental cloud. What we have found is in fact quite amazing: this stellar maternity ward is much bigger than we first thought and it has not stopped forming stars yet. We now have evidence for no less than more than one hundred such stars in this region, way beyond the few dozen known until now”.

Nicole Homeier adds: “Above all, we uncovered four massive clusters in there, with stars as massive as 120 times the mass of our Sun – real ’beasts’ that bombard their surroundings with incredibly intense stellar winds and strong ultraviolet light. This is not a nice place to live – and imagine, this is all inside our so-called ’quiet Galaxy’!”

The research described in this press release is presented in a research article in the professional research journal Astrophysical Journal (“Uncovering the Beast: Discovery of Embedded Massive Stellar Clusters in W49A” by João Alves and Nicole Homeier, Volume 589, pp. L45-L49). It is also one of the topics addressed by João Alves during his talk given at the General Assembly of the International Astronomical Union in Sydney on Tuesday, July 22, 2003.