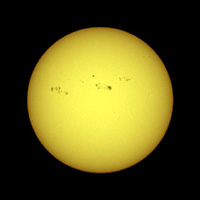 NASA and university astronomers have found evidence the 11-year sunspot cycle is driven in part by a giant conveyor belt-like, circulating current within the Sun.

The astronomers, Dr. David Hathaway, Robert Wilson and Ed Reichmann of NASA’s Marshall Space Flight Center in Huntsville, Ala., and Dr. Dibyendu Nandy of Montana State University in Bozeman, reported their findings the week of June 16 at the annual meeting of the Solar Physics Division of the American Astronomical Society in Laurel, Md. The results were also published in the May 20 issue of the Astrophysical Journal.

The astronomers made their discovery by reviewing the positions and sizes of all sunspots seen on the Sun since 1874. “The sunspots appear in two bands on either side of the Sun’s equator,” said Hathaway. “Although the individual sunspots come and go from week-to-week, the central positions of the bands in which they appear drift slowly toward the solar equator over the course of each 11-year sunspot cycle.”

Previously, scientists believed this equator-ward drift was a wave-like process involving magnetic forces. However, this new evidence suggests this drift is produced by a giant circulation system in which the compressed gases, 125,000 miles below the Sun’s surface, move from the Sun’s poles to its equator at about three mph — a leisurely walking pace. The gases then rise near the equator and turn back toward the poles, traveling in the surface layers where the gas is less compressed — moving at a faster rate of approximately 20 to 40 mph. Recent progress in theoretical modeling of the sunspot cycle has emphasized the important role of this circulation.

The circulation also appears to influence the strength of future cycles, as seen in the number and sizes of the sunspots produced, not in the cycle immediately following, but rather in a two-cycle or 22-year time lag. When the flow is fast, it concentrates the magnetic field at the Sun’s poles. These stronger fields are then transported downward into the solar interior where they are further compressed and amplified to become the intense magnetic fields that form sunspots years later.

The Sun is now in the declining phase of the current sunspot cycle that peaked in 2000 and 2001. Because the circulation flow was fast during the previous cycle, the astronomers believe the next cycle will be a strong one, peaking in the years 2010 and 2011.