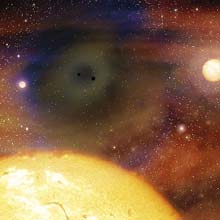 Using images from the Hubble Space Telescope, astronomers have concluded that two of the most common types of galaxies in the universe are in reality different versions of the same thing. In spite of their similar-sounding names, astronomers had long considered “dwarf elliptical” and “giant elliptical” galaxies to be distinct objects. The new findings, which appear in this month’s edition of The Astronomical Journal, fundamentally alter astronomers’ understanding of these important components of the universe.

Galaxies, the building blocks of the visible universe, are enormous systems of stars bound together by gravity and scattered throughout space. There are several different types, or shapes. For example, the Milky Way galaxy, in which the Earth resides, is a “spiral” galaxy, so named because its disk-like shape has an embedded spiral arm pattern. Other galaxies are known as “irregular” galaxies because they do not have distinct shapes. But together, dwarf and giant elliptical galaxies are the most common.

Alister Graham and Rafael Guzmán from the University of Florida decided to take a second look at the accepted wisdom. Expanding on work started by Graham at the Instituto de Astrofísica de Canarias (IAC) in Spain, the pair analyzed images of dwarf elliptical galaxies taken by the Hubble Space Telescope and combined their results with previously collected data on over 200 galaxies. The resulting sample revealed distributions of stars displaying a continuous variety of structures between the allegedly different dwarf and giant galaxy classes – in other words, these two types were just relatively extreme versions of the same object. Moreover, there was one rather interesting caveat.

In recent years, Graham said, a number of studies had revealed that the innermost centers of giant elliptical galaxies – the inner 1 percent – had been scoured out or emptied of stars. Astronomers suspect that massive black holes are responsible, gravitationally hurling away any stars that ventured too near and devouring the stars that came in really close. This scouring phenomenon had tended to dim the centers of giant elliptical galaxies, which ran counter to the trend that bigger galaxies tend to have brighter centers. The dimming phenomenon was one reason astronomers had concluded dwarf and giant galaxies must be different types.

Together with Ignacio Trujillo of the Max-Planck Institut für Astronomie in Germany and Peter Erwin and Andres Asensio Ramos of the IAC, Graham addresses this phenomenon in a separate article that appears in the same issue of The Astronomical Journal. Building on recent revelations showing a strong connection between the mass of the central black holes and the properties of their host galaxies, Graham and his colleagues introduced a new mathematical model that simultaneously describes the distribution of stars in the inner and outer parts of the galaxy. “It was only after allowing for the modification of the cores by the black holes that we were able to fully unify the dwarf and giant galaxy population,” Graham said.

“This helps to simplify the universe slightly because we can replace two distinct galaxy types with one,” said Graham. “But the implications go beyond mere astronomical taxonomy. Astronomers had thought the formation mechanisms for these objects must be different, but instead there must be a unifying construction process.”

“In astronomy, like in physical anthropology, there is a deep connection between the classification of species and their evolutionary connections,” van den Bergh said. “The bottom line is that the new work of Graham and Guzmán has made life a little bit simpler for those of us who want to understand how galaxies are formed and have evolved.”