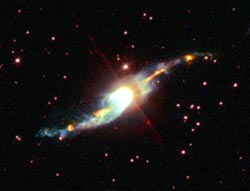 There are many mysterious objects seen in the night sky which are not really well understood. For example, astronomers are puzzled by the “jets” emerging from planetary nebulae. However, the S-shaped jet from Henize 3-1475 is the most perplexing of all.

“Jets” are long outflows of fast-moving gas found near many objects in the Universe, such as around young stars, or coming from black holes, neutron stars, and planetary nebulae, for example. The NASA/ESA Hubble Space Telescope has imaged the young planetary nebula Henize 3-1475 and its bizarre jet. Astronomers have nicknamed it the “Garden-sprinkler” Nebula.

The origin of jets in the Universe is unclear, but they appear to originate in small regions of space where even Hubble’s sharp vision cannot penetrate. To produce a jet, you require some sort of nozzle mechanism. So far, these theoretical “nozzles” remain hidden by dust that obscures our view of the centres of planetary nebulae.

Despite decades of intense effort, there is no single example of a jet whose origin is clearly understood. The curious S-shape and extreme high speed of its gaseous outflow gives Henize 3-1475 a special place in the study of planetary nebulae.

Henize 3-1475 is located in the constellation of Sagittarius around 18 000 light-years away from us. The central star is more than 12 000 times as luminous as our Sun and weighs three to five times as much. With a velocity of around 4 million kilometres per hour, the jets are the fastest ever discovered. Scientists are also intrigued by the converging, funnel-shaped structures that connect the innermost “knots” and the core region.

A group of international astronomers led by Angels Riera from Universitat Politècnica de Catalunya, Barcelona, Spain, have combined observations from Hubble’s Wide Field and Planetary Camera 2, the Space Telescope Imaging Spectrograph and ground-based telescopes. Their work suggests that the nebula’’s S-shape and hypervelocity outflow is created by a central source that ejects streams of gas in opposite directions and precesses once every 1500 years. It is like an enormous, slowly rotating garden sprinkler.

The flow is not smooth, but rather episodic with an interval of about 100 years, creating clumps of gas moving away at velocities up to 4 million kilometres per hour. The reason for these intermittent ejections of gas is not known. It may be due to either cyclic magnetic processes in the central star (similar to the Sun’s 22-year magnetic cycle), or to interactions with a companion star.