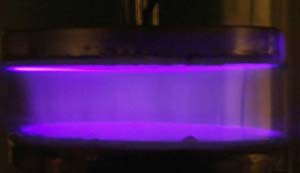 Photograph of the plasma generated between the two electrodes <br>&copy; Institute of Physics

The use of toxic chemicals to sterilise medical instruments may soon be a thing of the past, according to researchers at Old Dominion University in Norfolk, Virginia, and the University of California in San Diego. Their work, released on 30 April 2003 in New Journal of Physics, published jointly by the Institute of Physics and the German Physical Society, tests a new way of killing bacteria using a plasma at room temperature and pressure, which could have applications in decontamination of biological warfare agents and sterilisation.

A plasma is a collection of electrically charged particles such as electrons, and non-charged particles such as radicals (a type of chemically reactive atom or molecule). Plasma is often called the fourth state of matter – you can have matter as a solid, a liquid, a gas, or as a plasma. In the same way that you can turn water (a liquid) into steam (a gas) by heating it, you can also change a gas into a plasma by heating it up even more. Because of this, most plasmas at atmospheric pressure are thousands of degrees Centigrade, and so are impractical for everyday use. However, Dr Laroussi, Dr Mendis and Dr Rosenberg used a ‘cold plasma’ that was close to room temperature and atmospheric pressure in their experiments.

A successful way to make this kind of cold plasma was only developed in the nineteen-nineties. Dr Laroussi and his colleagues can now create cold plasma using two flat electrodes (plates of metal covered with a layer of poorly conducting material, visible in the image above) which have a variable gap between them, up to 5cm. A mixture of 97% helium and 3% oxygen is injected to this gap, and the electrodes are supplied with between 50 and 300 W of power – less than many food processors use. This creates a new type of plasma, which is cheaper and easier to use than previous kinds because it is at room temperature and pressure and uses little power.

The researchers tested the effects that this plasma had on two types of bacteria – one type that forms spores, and one type that does not. This distinction between these two types is important, as bacterial spores are tougher and therefore much harder to kill than the normal ‘vegetative’ bacterial cells. The spore-forming bacterium they used was Bacillus subtilis, which is similar to anthrax, but not dangerous. The other bacterium tested was Escherichia coli, which does not form spores, and is one cause of food poisoning.

It is likely that cold plasmas would not only kill other kinds of more dangerous bacteria, but also viruses. Although viruses have a different structure from bacteria, they would also become damaged by the charged particles. The possible applications for sterilisation using cold plasmas range from the food industry to planetary space missions. Using plasmas to sterilise food packaging would give the food a longer shelf life than at present. The same technique could also be used on spacecraft leaving Earth to avoid transporting micro-organisms from Earth to other planets or moons.

Dr Laroussi is confident of the potential for applications in the medical field:
“The use of cold plasma to sterilise heat-sensitive reusable medical tools in a rapid, safe, and effective way is bound to replace the present method which uses a toxic gas, ethylene oxide,” he said. “Plasma is also being seriously considered for the decontamination of biological warfare agents.”