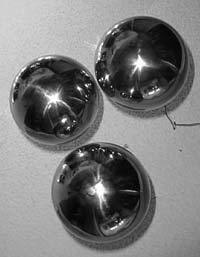 UC Riverside researchers Anders Wistrom and Armik Khachatourian first observed the electrostatic rotation in static experiments that consisted of three metal spheres suspended by thin metal wires. When a DC voltage was applied to the spheres, the spheres began to rotate until the stiffness of the suspending wires prevented further rotation. (Photo credit: Anders Wistrom.) <br>

In a discovery that is likely to impact fields as diverse as atomic physics, chemistry and nanotechnology, researchers have identified a new physical phenomenon, electrostatic rotation, that, in the absence of friction, leads to spin. Because the electric force is one of the fundamental forces of nature, this leap forward in understanding may help reveal how the smallest building blocks in nature react to form solids, liquids and gases that constitute the material world around us.

Scientists Anders Wistrom and Armik Khachatourian of University of California, Riverside first observed the electrostatic rotation in static experiments that consisted of three metal spheres suspended by thin metal wires, and published their observations in Applied Physics Letters. When a DC voltage was applied to the spheres they began to rotate until the stiffness of the suspending wires prevented further rotation. The observed electrostatic rotation was not expected and could not be explained by available theory.

Wistrom and Khachatourian designed the study with concepts they had developed earlier. “Experimental and theoretical work from our laboratory suggested that the cumulative effect of electric charges would be an asymmetric force if the charges sitting on the surface of spheres were asymmetrically distributed,” said Wistrom. “In the experiments, we could control the charge distribution by controlling the relative position of the three spheres.”

Yet, for more than 200 years, researchers have known only about the push and pull of electric forces between objects with like or unlike charges. Since as early as 1854, when Thomson, later to become Lord Kelvin, theorized about an electric potential surrounding charged objects, scientists have concentrated on understanding how electric and magnetic phenomena are related.

“While Thomson’s hypothesis of electric potential has brought enormous benefits when it comes to modern electromagnetic technologies, we now realize that his definition of electric potential was not exact,” said Wistrom. “The effects are particularly noticeable when the spheres are very close to one another.” (Electric potential is the ratio of the work done by an external force in moving a charge from one point to another divided by the magnitude of the charge.)

Indeed, the general applicability of Thomson’s theory has not been tested experimentally or theoretically until now. In the Journal of Mathematical Physics, Wistrom and Khachatourian recently published the breakthrough that provides the theoretical underpinnings for electrostatic rotation. “It is very satisfying to learn that electrostatic rotation can be predicted by the simple laws of voltage and force that date back at least 200 years,” Wistrom said.

He added, “This is curiosity driven research that starts with a simple question and ultimately leads to findings that will likely have impacts across many fields of science and engineering. Because electrostatic rotation without friction leads to spin, we can only speculate how this discovery will provide new approaches to aid the investigation of fundamental properties of matter.”

Spin is used in quantum mechanics to explain phenomena at the nuclear, atomic, and molecular domains for which there is no concrete physical picture. “So the discovery of electrostatic rotation and the identification of electrostatic spin as a natural phenomenon opens up an entirely new field of inquiry with the potential for significant advances,” Wistrom said.