Vibrations of the Cosmic Drumhead 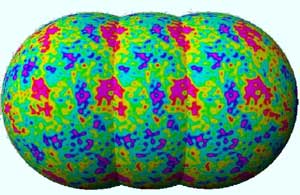 Cosmologists hope to “hear the shape of space”, namely its topology, by analyzing in detail the temperature fluctuations in the cosmic microwave background radiation (CMB). An international team of cosmologists, including researchers from l’Observatoire de Paris, has recently developped a model for the vibrations of the universe. For the first time [1], they have simulated high resolution CMB maps containing the signatures of a wide class of topologies, for comparison with the forthcoming MAP satellite data in early 2003.

The shape of space

In recent years, cosmologists have become interested in the global shape of space [2]. Previously, most of them had neglected the fact that, even if space is flat on a large scale, it can take many different shapes, for instance that of a doughnut-like hypertorus. A space of a given curvature admits a number a topologies. Indeed, 18 flat topologies along with an infinite number of spherical and hyperbolic ones are theoretical candidates to describe the shape of physical space.

Although recent CMB observations constrain the value of space curvature to a very narrow range about zero, they still leave open the question of whether the average curvature is exactly zero (corresponding to a flat universe) slightly positive (spherical universe) or slightly negative (hyperbolic universe), and above all whether the topology is simple (for instance an infinite flat space) or not (for instance a finite flat hypertorus).
In a previous article [3], three authors have proved that the spherical topologies would be more easily detectable observationally than hyperbolic or flat ones. The reason is that, no matter how close space is to perfect flatness, only a finite number of spherical shapes are excluded by observational constraints. Due to the special structure of spherical spaces, topological imprints would be potentially detectable within the observable universe. Thus cosmologists are taking a renewed interest in spherical spaces as possible models for the physical universe. Now the main question is : how to detect the topology of space?

The Universe as a drumhead

If you sprinkle fine sand uniformly over a drumhead and then make it vibrate, the grains of sand will collect in characteristic spots and figures, called Chladni patterns. These patterns reveal much information about the size and the shape of the drum and the elasticity of its membrane. In particular, the distribution of spots depends not only on the way the drum vibrated initially but also on the global shape of the drum, because the waves will be reflected differently according to whether the edge of the drumhead is a circle, an ellipse, a square, or some other shape.

In cosmology, the early Universe was crossed by real acoustic waves generated soon after Big Bang. Such vibrations left their imprints 300 000 years later as tiny density fluctuations in the primordial plasma. Hot and cold spots in the present-day 2.7 K CMB radiation reveal those density fluctuations. Thus the CMB temperature fluctuations look like Chladni patterns resulting from a complicated three-dimensional drumhead that vibrated for 300 000 years. They yield a wealth of information about the physical conditions that prevailed in the early Universe, as well as present geometrical properties like space curvature and topology. More precisely, density fluctuations may be expressed as combinations of the vibrational modes of space, just as the vibration of a drumhead may be expressed as a combination of the drumhead’s harmonics.

For the first time, a team of physicists has shown how the shape of a spherical space can be heard in a unique way. They calculated the harmonics (the so-called “eigenmodes of the Laplace operator”) for most of the spherical topologies [4]. Next, starting from a set of initial conditions fixing how the universe originally vibrated (the so-called Harrison-Zeldovich spectrum), they evolved the harmonics forward in time to simulate realistic CMB maps for a number of topologies, including flat and spherical ones [1].

Waiting for the data

Balloon-borne CMB experiments (Boomerang, DASI, Archeops) have put tight constraints on the curvature of space, but provide too little data to test the topology of the Universe because they cover only a small portion of the sky. The situation is about to change dramatically with the MAP (Microwave Anisotropy Probe) satellite mission.

Launched by NASA in April, 2001, it will provide high resolution maps of CMB fluctuations on the whole sky, excluding the portion obscured by our own Milky Way galaxy. The 6-month MAP data will be released late January or early February 2003. A topological signal as predicted in [5], and simulated in the maps of [1], may be subtly encoded in these data, and may eventually answer the fascinating question whether space is finite.