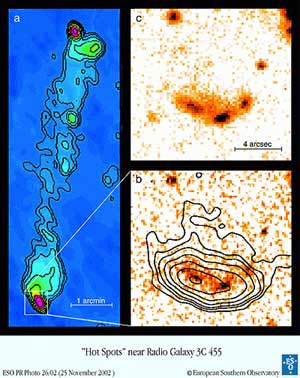 The Universe is a violent place – as astronomers use increasingly sensitive means and methods to study the diverse processes out there, they become aware of the extraordinary forces acting in the space that surrounds us.

With larger telescopes and ever-more sophisticated instruments, new information is gained about remote celestial objects and their behaviour. Among the most intriguing ones are the radio galaxies which emit prodiguous amounts of energy, in the form of fast-moving particles and intense electromagnetic radiation.

One of these is known as 3C 445; it is located near the celestial equator within the zodiacal constellation Aquarius (The Waterman), at a distance of about 1 billion light-years. It most probably harbours a black hole at its centre, more massive than the one at the centre of our own galaxy, the Milky Way (ESO PR 19/02). This galaxy was first observed from Cambridge (United Kingdom) in the 1950’’s and was listed as radio source no. 445 in the Third Cambridge Catalogue (1959), hence the name.

Later observations revealed a strong outflow from this galaxy’’s active centre, visible on radio maps as two opposite plasma jets with strong synchrotron radiation ([2]) originating from rapidly moving electrons in the associated magnetic field (image “a” in PR Photo 26/02).

Now, a trio of European astronomers [1] have used two advanced instruments, ISAAC and FORS1 on the 8.2-m VLT ANTU telescope at the ESO Paranal Observatory (Chile) to obtain near-infrared images of these jets (images “b” and “c” in PR Photo 26/02).

As can be clearly seen on the radio picture of 3C 445 obtained with the NRAO Very Large Array (VLA) radio facility (“a”), the plasma jets of fast particles emanating from the galaxy ram into the surrounding intergalactic medium (mostly primordial hydrogen), thereby producing two “shocks”, both at a distance of approximately 1.5 million light-years from the central galaxy and with particularly strong synchrotron emission. With a total length of more than 3 million light-years, or no less than one-and-a-half times the distance from the Milky Way to the Andromeda galaxy, this structure is indeed gigantic.

The region where the jets collide with the intergalactic medium are known as “hot spots”. Superposing the intensity contours of the radio emission from the southern “hot spot” on a near-infrared J-band (wavelength 1.25 micron) VLT ISAAC image (“b”) shows three distinct emitting areas; they are even better visible on the I-band (0.9 micron) FORS1 image (“c”). This emission is obviously associated with the shock front visible on the radio image.

This is one of the first times it has been possible to obtain an optical/near-IR image of synchrotron emission from such an intergalactic shock and, thanks to the sensitivity and image sharpness of the VLT, the most detailed view of its kind so far.

The central area (with the strongest emission) is where the plasma jet from the galaxy centre hits the intergalactic medium. The light from the two other “knots”, some 10 – 15,000 light-years away from the central “hot spot”, is also interpreted as synchrotron emission. However, in view of the large distance, the astronomers are convinced that it must be caused by electrons accelerated in secondary processes at those sites.

The new images thus confirm that electrons are being continuously accelerated in these “knots” – hence called “cosmic accelerators” – far from the galaxy and the main jets, and in nearly empty space. The exact physical circumstances of this effect are not well known and will be the subject of further investigations.

The present VLT-images of the “hot spots” near 3C 445 may not have the same public appeal as some of those beautiful images that have been produced by the same instruments during the past years. But they are not less valuable – their unusual importance is of a different kind, as they now herald the advent of fundamentally new insights into the mysteries of this class of remote and active cosmic objects.