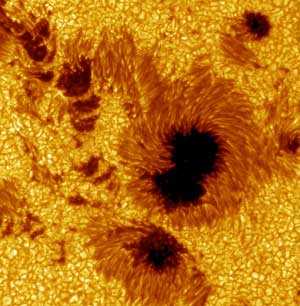 Part of the sunspot group near disk center

The first pictures from the new Swedish solar telescope on La Palma, Canary Islands, are presented in an article in the prestigious science journal Nature from November 14. The images of the sun are the most detailed ever seen. One of the most sensational discoveries is a previously unknown detailed sunspot structure.

The impact of this discovery is now capturing the attention of solar researchers, and it won`t be long before new and revised theories are formulated.

The solar telescope was designed and built in Sweden and is run by the Institute for Solar Research at the Royal Academy of Science. It boasts a lens one meter in diameter and is specially constructed to cope with problems of movement in the air and atmosphere, which normally disturb in the image. All air has been pumped out of the telescope tube, and a mirror in the path of light changes shape roughly a thousand times per second to counteract disturbances from the atmosphere. This means that the pictures are the sharpest ever taken of the sun. The resolution would allow the bottom line of eye-test charts to be read from a distance of 3 km.

The new images show narrow dark cores in the threadlike structures surrounding the dark part of a sunspot. The nature of these cores is still unknown. Sunspots are areas with highly concentrated magnetic fields. The sun¢s magnetic fields can have a major impact on the function of telecommunications and satellites.

Note: Observatories in space that study the sun are equipped with telescopes that are too small to compete with the land-based Swedish telescope in terms of resolution. They, on the other hand, can detect radiation that does not penetrate to the surface of the earth, thus complementing our picture of the sun. Observations from earth, however, are easily marred by movements in the atmosphere and require extremely stable air. The observation site atop the extinct volcano on La Palma can be regarded as the best in the world for a solar telescope. The island of La Palma should not be confused with the city of Las Palmas on Gran Canaria.